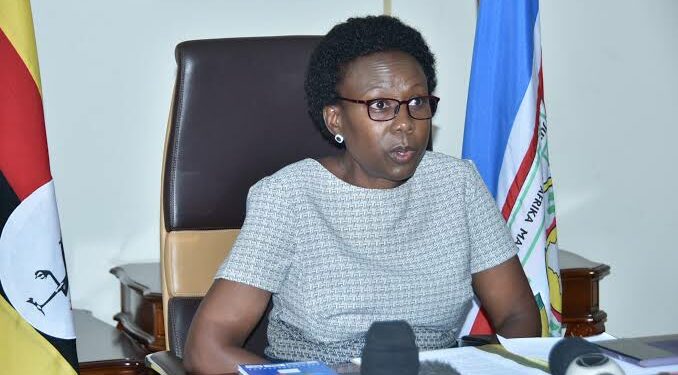 Dr Jane Ruth Aceng (born 11 May 1968), is a Ugandan pediatrician and politician.

She is the Minister of Health in the Cabinet of Uganda. She was appointed to that position on 6 June 2016.

Before that, from June 2011 until June 2016, she served as the Director General of Medical Services in the Ugandan Ministry of Health.

Aceng was born on 11 May 1968. She attended Shimoni Primary School in Kampala, Uganda’s capital city. She studied at Nabisunsa Girls Secondary School for both her Ordinary and Advanced Level education.

After he studies, she began serving as a medical officer in the health ministry. At the time she was appointed Director General of Medical Services, she was serving as executive director of Lira Regional Referral Hospital.

In July 2020, Dr Jane Ruth Aceng declared her intentions to contest for the position of Women Representative for Lira District, in the 11th Parliament (2021 – 2026). In the 2021 general elections, Aceng emerged winner thus becoming the Lira district Woman legislator.

She has participated and published widely in the field of medicine and some of her works are outlined below;

2020: Estimating the Effect and Cost-Effectiveness of Facemasks in Reducing the Spread of the Severe Acute Respiratory Syndrome-Coronavirus 2 (SARS-CoV-2) in Uganda.

2015: Is the glass half full or half empty? A qualitative exploration on treatment practices and perceived barriers to biomedical care for patients with nodding syndrome in post-conflict northern Uganda.

2005: Rectal artemether versus intravenous quinine for the treatment of cerebral malaria in children in Uganda: randomised clinical trial.

ARTHUR MUSINGUZI: Africell’s Downfall is Majorly a Result of Poor Planning, not a Reflection of the Entire Economy

ARTHUR MUSINGUZI: Africell's Downfall is Majorly a Result of Poor Planning, not a Reflection of the Entire Economy