The Army Commander Gen. David Muhoozi, on Thursday issued a statement distancing the Army from the brutality, saying the errant officers had acted individually. 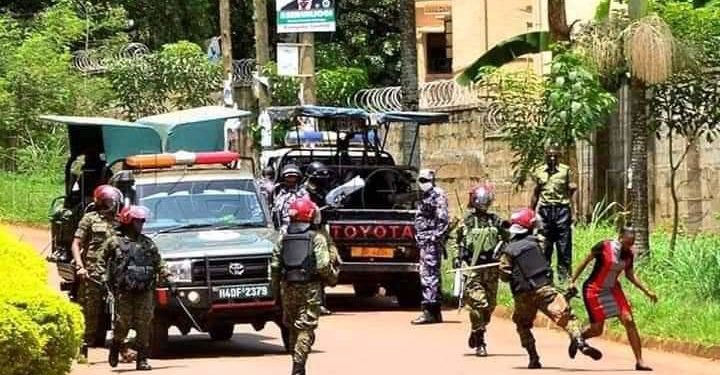 The United Nations Organisation [UN] on Wednesday called for an instant probe into the alleged brutality meted by the military against members of the press who had escorted Uganda’s main opposition leader Robert Kyagulanyi Ssentamu to deliver a petition at their Human Rights Commission local office in Kampala.

At least seven journalists were reported to have been assaulted in the scuffle as the military tried to stop the crowd from accessing the rights offices after Bobi Wine was already inside.

Bobi Wine, who came second in the January 14 presidential polls had gone to the UN human rights offices to protest against the continued gross human rights abuse including arbitrary arrests and detentions that have proceeded the contested elections.

The former presidential candidate condemned the attack on the media persons and some politicians from his National Unity Platform Party who were also injured in the scuffle.

“In a very contemptuous manner, they descended on everyone they could land on and beat them without mercy, ” Bobi Wine tweeted.

Brig Flavia Byekwaso, the army Spokesperson said some members in the crowd that had escorted Mr Wine had provoked the officers into reacting. She however said the army regrets that some journalists were injured in the process.

“The UN calls on the Government to immediately investigate this incident and ensure that those responsible are brought to justice,” the UN statement said, adding that the conduct by the Ugandan military officers contravenes an agreement with authorities regarding the safety of UN premises, staff and guests.

The Army Commander Gen. David Muhoozi, on Thursday issued a statement distancing the Army from the brutality, saying the errant officers had acted individually.

“I am here to tell you that this was a mistake by individuals.The operation was not sanctioned by us,” Muhoozi told the media.

“Nobody sent those people because when we send out people, we give them rules of engagement. But these went into excess and that’s why we are working to establish what happened and to hold the culprits accountable,” he added.

Muhoozi also apologised to the media and the general public at the press conference held at his office at Mbuya Military barracks.