by Stephen Kalema
in National, News
57 1 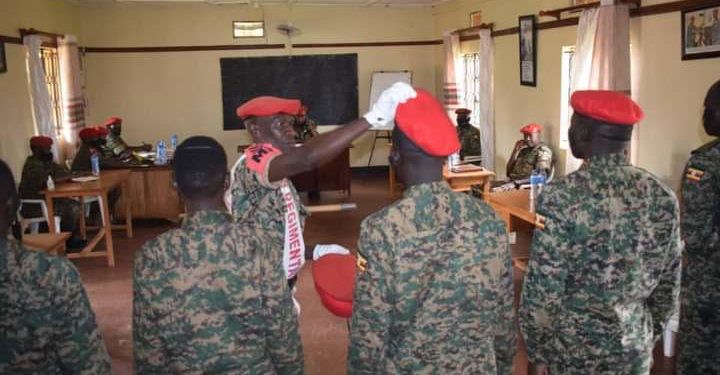 The military police unit disciplinary committee (UDC) of the court martial, has on Thursday convened and deliberated on its officer and militants who misbehaved and assaulted journalists.

L/cpl Zirimenya was charged with 60 days while Cpl Nimusiima Justine was sentenced to severe reprimand and caution while Pte Kisakye Victoria and Pte Opiyo Isaac were sentenced to 62 and 60 days in the military prison respectively.

The UDC chairman Lt Col Gai Mpandwa warned the culprits and the entire military police at large to always emulate discipline and professionalism while on any deployment. He also added that the above officer and militants will act as a deterrent measure to officers and militants while executing their constitutional mandate.

Earlier today, the UPDF Chief of Defense Forces, Gen David Muhoozi apologized to the media fraternity and pledged that the army will clear the medical bills of journalists that were assaulted by their officers.

Addressing the media in Kampala, Gen Muhoozi promised that they were going to take action against the errant UPDF officers.

“That incident is regrettable and I want to extend my apologies to those friends of ours who were assaulted. Joseph Sabiti of NBS, Rashida Nakaayi from Galaxy FM, Timothy Murungi from Vision group, the exercise exhibited was not sanctioned nor were they justified. The UPDF cares and recognizes the importance of the smooth partnership with the media and of course the population.Therefore, we would be the last people to target a journalist or anyone for that matter in an illegitimate way. Appropriate actions will be taken against the identifiable culprits,” he assured the media.

Some of the journalists who severely beaten include; Geoffrey Twesigye of NTV, Irene Abalo of Daily Monitor, Shamim Nabakooza of Record TV, John Cliff Wamala of NTV and Timothy Murungi of New Vision.

Others are Rashida Nakaayi of Galaxy FM, Josephine Namakumbi of NBS, Henry Sekanjako of New Vision, Joseph Sabiti of NBS and Thomas Kitimbo of NBS TV.