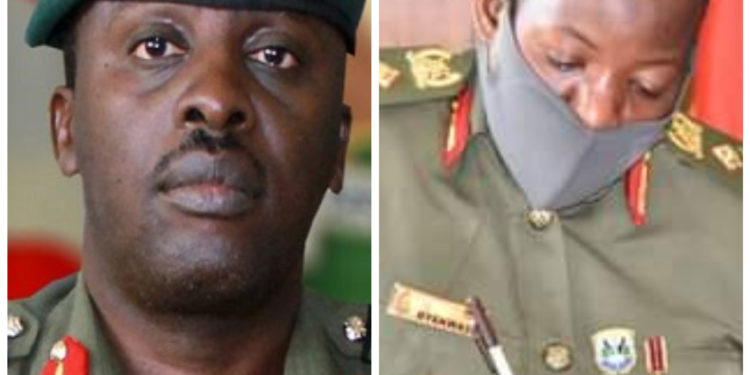 Following the very disturbing incident where a number of journalists were on Wednesday 17 clobbered by the military, the army has resultantly pronounced itself on the matter.

The UPDF Spokesperson Brig. Gen. Flavia Byekwaso was the first to issue a statement on the incident on Wednesday 17 before the army Commander Gen. David Muhoozi called a press conference at his office in Mbuya to address the same matter.

In her Wednesday tweet, Brig Byekwaso blamed the crowd that had escorted Robert Kyagulanyi to deliver his petition for the violence that ensued. She said that some members in the crowd had attacked one of the soldiers on duty.

“Today, a joint deployment to deter processions as a standing SOP to prevent COVID19 spread, led to confrontations with security. Security deployed at positions named as cut off security points to ensure Hon. Kyagulanyi moves to the UN human rights office with 3 people as the UN had requested and not a crowd and procession,” She tweeted.

She went on to claim that the group had gone on to attack one member of the security team attracting the brutal response from the rest of the officers as was witnessed.

“The group assaulted one of the security personnel at one of the cut off points and that required they be pushed back forcefully. Hence the scuffle. Therefore, it is not right to allege that journalists were targeted,” she concluded.

Whereas Byekwaso’s observation sounds purely defensive of the culprits of Wednesday’s brutality, her boss Muhoozi’s is purely apologetic and remorseful.

In a Thursday presser at his office in Mbuya, The UPDF chief started by disowning the perpetuators of the violence whom he said would get reprimanded after the investigations are done. He argued further that the operation was not sanctioned by the army and the mistakes witnessed were accountable to the individual officers.

He described the actions of the brutal officers as ” went into excess,” as he asked for forgiveness from the media and the general public for the regrettable incident.

” I am here to tell you this was a mistake by individuals. This operation was not sanctioned by us,” Gen Muhoozi said.

” Nobody sent these people because when we send out people, we give them rules of engagement but these people went into excess and that’s why we are working on establishing what happened and to hold the culprits accountable,” he added.

He also apologised to the media fraternity, pledged to foot medical bills for the victims and also promised an amicable relationship with the press going forward.

The statements by the two officers sharply contradict each other as observed above. Whereas Gen. Muhoozi categorically insists the officers had been out on the operation on their own. On the other hand, Byekwaso’s tweet confirms that they were indeed deployed to provide a possible crowd escorting Kyagulanyi from accessing the destination offices.

This raises an important question on the sincerity in the army’s apologies to the victims, the media and the general public as pronounced by CDF David Muhoozi.