by Andrew Baba Buluba
in Conversations with, Op-Ed
56 3 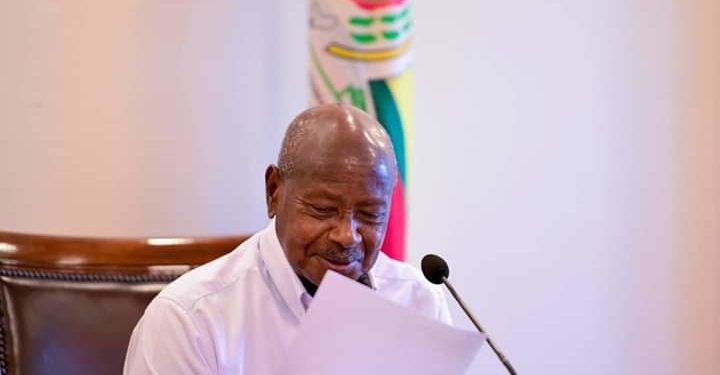 Dear lovely Jajja, how have you been lately? I know with Robert  Kyagulanyi’s election petition, you can’t be fully well. But somehow, I know you will find a way out as you have always done in the past.

Kindly receive my letter and possibly respond to it in an appropriate way. I fear the brutal men in uniform. Kindly don’t revert through them in anyway as answers delivered through them would make me shudder.

Grandpa, I forgot to tell you I am a journalist nowadays. But you should have known after all I was integral in mobilising the media to vote for you and drum for you support all over the country. Thank God you won.

On any possible discussion on my deployment in your next government [ In case Owinyi Dollo leaves you in peace], I will possibly reach out another time through Presidential Advisor Full Figure or Buchaman.

The main point Mr President, I would like to report to you that when you were wherever you have been, the men in uniform once again brutalised your innocent grandchildren in the media going about what they were trained to do – taking news to the people.

Your Excellence Sir, yesterday’s attack was an exceedingly brutal one as many of the victims survived with grave injuries on their already worn out bodies. I was at home your Excellence. I watched the grizzly incident on TV and fear has gripped me until now.

Watching every drop of blood that spilled from my mates’ flesh, the painful groans from their throats and their intimidated gazes at the indifferent brutalists armed with guns and batons shook the hope and pride of belonging to the side of my friends’ tormentors out of my veins.

Watching fellow journalists – your bazzukulu, desperately running for their lives, at work is something I should not have witnessed under your wise leadership. The timing too was wrong. Our government is already struggling to water down claims by the opposition of acute violation of human rights. For this particular incident, the violence was meted against your people at the very gates of the United Nations High Commission where they had gone to report us for the ongoing human rights violations.

Your Excellency Sir, my grandpa, my President, we already have enough problems to solve. We can’t let the military destroy what a generation prides in due to the sacrifices of the men you led to ;Luwero to depose Obote. Your people should not be walking in fear simply because of the brutality of the men and women who wear our uniform. Those holding the guns procured by the tax payers’ toils.

We can not afford to continue annoying the media Mr President. It is not fair for us to continue exposing this maiden profession to shame like our brutal soldiers want it done. I wonder how many parents will in future wish to encourage their sons and daughters to join a profession that the security agencies has turned into a real death trap. Your media Bazukulu nowadays walk with hidden faces because of the shame the military has exposed their profession to. I doubt they will nature a new crop of journalists when their time finally ends. Its a big shame. Very big.

Grandpa, some of the young men and women you see humiliated every day on live camera have already given you grand grand children. They are parents. Each time they are treated like chicken thieves like was the case yesterday, there are always a million questions to answer to their confused young ones on why they are clobbered if they are not criminals! Thieves.

I myself found a very hard time convincing your 8 year old grand grand son that being clobbered and publicly humiliated was nowadays part of our job as journalists of this generation [in Uganda. under your administration]. His next question was ” Then why would someone chose to do a job where being beaten in the public is part of it! Find another job Daddy. I don’t want to see you beaten like those others you say are your colleagues.” I was challenged and beaten.

Yet I know being a journalist is not as bad a calling as my son has been made to believe, I still lacked what it takes to convince anyone, be it my own son, that such is a profession for one to pride in.

Like I said earlier, I formed part of your 2021 campaign team, mobilising for your election along with my fellow journalists. Many times Mr President, either you or other party officials have complained about the partiality of the media when reporting on political matters. Look here Your Excellency; these young men and women get to the field every day not very sure they will return to find their families, walking and unscratched as they left. Some have sustained career ending injuries like was the case for Ashraf Kasirye of Ghetto TV. Many have watched their comrades demeaned, humiliated, tramped upon, arrested and detained under the most brutal conditions ever witnessed. Is it not just natural that such people will be biased? Are we not the ones propagating all these biases among the journalists?

Mr President Sir, the media might not like your government but by conduct, the military seem to hate it more. By treating your people like this, they are squeezing any grains of patience and hope out of them your Excellency. If things continue this way, I am sorry to say I am already worried about what will be the repercussion. It is good we have a dependable force to counter any sort of resistance. But what about the possible loss of lives, who will be held accountable? Who will ever be able to celebrated such a victory when we could have been able to avoid the deterioration of the situation?

We need your protection Mr President. We need an assurance about our lives and our safety each time we go out there to do our work. Journalists demand respect from the security, the leaders and government. They also wish to get back home and receive the same respect a banker, a teacher, a soldier, a Minister receives from their families each time they return from duty. We demand justice. Reign in on your brutal officers so this won’t happen again. We voted for you, secure our future now. Including that of the media because so you promised.