Stop reminding me about my assignments, Museveni to Ugandans

by Stephen Kalema
in National, News
13 0
Share on FacebookShare on TwitterShare on Email

President Kaguta Museveni has told Ugandans to stop reminding him of his duties because he knows them more than anybody.

While speaking at the 33th Liberation Day celebration at Muwafu Primary School grounds,  Nabuyoga Sub-county in Tororo district, on Saturday, Museveni asked Ugandans to concentrate on doing their work instead of telling him what he has not done.
“I have always done my work. If also you do your assignments, poverty would be history in your homes but you have spent time speaking what I should do yet I know them more than you,” said Museveni.

January 26, is celebrated to every year in remembrance of the National Resistance Movement NRM overthrew Gen Tito Okello’s government in 1986.

At the beginning of his speech, the President mentioned principals that the NRM has stood on for in all the 33 years, including patriotism.

One of the other principals he spoke of was economic transformation.

Meanwhile on the same accession President Museveni launched Universal Primary Education pictorial book; a book that tells the story of UPE and its major role in transforming the education sector in the last 20 years.

He used this occasion to mock 1996 presidential candidate Paul Kawanga Ssemogerere who ‘laughed’ at the UPE proposal.

“While I was starting this programme of UPE, Ssemogerere laughed at me and said ‘where will Museveni get the money to teach all Ugandan children?’ But now see where we are. So far we have 8.8 million people on this program and every year we spend Shs1.8trillion.” 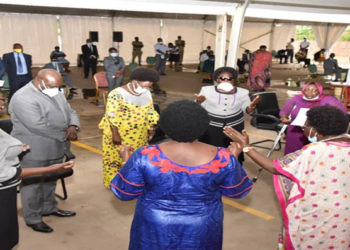 Maureen Kyalya announces breakup with hubby of 20 years in style