by Our Correspondent
in Tourism, Travel
9 1
ShareTweetSendShare

Until recently, Nansubuga Hill was only a cultural site for people of the Mamba Clan (lung fish) who prayed to the spirit of Nansubuga for various blessings under the buttress of a large fig tree that is believed to be 600 years old.

The buttress roots of the fig tree are shaped just like giant lung fish and an person of average height (5.7) on standing gets ‘swallowed’ by the buttresses.

According to Mayombwe, the caretaker of the fig tree, the place was known for people who came to pay homage to the spirit of Nansubuga and they would hold fetes that lasted three nights and more.

“This place is unique and important to the sons and daughters who belong to the Mamba Clan especially in Mawokota and Kyaddondo and Busiro. They all come here to ask for blessings and my job is to receive them and intercede for them,” Mayombwe says.

The hill has spectacular views of Entebbe International Airport, the Mabamba Bay that connects to Busi Island and almost surrounded by the famous Mabamba Swamp with its giant and fossil bird; the shoe bill. While here, the whole West end of Entebbe town is at your feet and beyond the Mabamba Swamp lies the undulating hills of Mpigi. On the northside is the town of Kasanje as one arm of Lake Victoria extends to Kasanje landing site. Further south, the great Lake Victoria beckons lovingly.

The hill sits on not less than 30 acres of forested land with a host of birds ranging from the blue turaco, the shoe bill (of course), the yellow billed duck, the African spoon bill, the sacred ibis, African jacana, various cuckoos, the palm-nut vulture, the fish eagle, the king fishers; in short, this is a birder’s paradise.

My guide, one Siraje who also doubles as the Ag. Manager and Nkima Forest Lodge had this to say; “Various birders who come to Mabamba are sometimes not told that Nansubuga hill is the perching point for most of the birds that are spotted in Mabamba Swamp. They are surprised therefore to find much more than they bargained for. The have found some of the most rare birds here such as the Wolly-necked stork, the reed cormorant, the black-headed heron and the spoon bill;”

It is at this site that Elaine Roberts and her husband Chris, ardent birders and nature lovers set out to build Nkima Forest Lodge which has been operational for less than a year but has become a to go to ‘wild escape’ in the city that different people have turned it into a weekend gateway.

According to an elderly French couple that I met here on my own weekend escape said that they did not have the back to go to a game park and asked their daughter who resides in Kampala to recommend a place that has that wild feel and she recommended them to Nkima Forest Lodge at Nansubuga hill.

“This place has vintage luxury. It has grandeur written all over it but with African simplicity. The cabins are nature inspired with minimal interruptions. See, when we came, it rained and you could feel the rain dropping gently on the roof as the canopy of the trees above the cabin lessened the intensity of the rain. It was so sensual and a great African experience. The foliage has not been interrupted. Everything has been left intact. We most liked the lavatory area with a translucent roof to allow in as much light. It is also solar powered; the water and the lighting; harnessing mother-nature”

On the weekend of my visit, as the evening fell, the sound of the turaco stroked my senses and the different monkeys jumped from canopy to canopy as I sipped on my favourite drink at the forested deck.

At about 9:00pm, I was given a head lamp as I sauntered to my double cabin which I found so intimate that I should have negotiated for company. The cabins are so private that entrance is from the back and the front deck is all to you the lodger as there are no cabins facing each other.

The rooms are all lined with Africa themed bright colours with a touch of modernity meeting timeless Africa in the wilderness. At the bar and lounge, there are various books on travel and African safari that you can plunge in as you order for freshly made tropical juices; if you are the type that does not mingle well with liquor.

And on a warm day, you can take a leisurely swim at their rock themed swimming pool that overlooks the Mabamba Forest as the birds chirp and sing their latest melodies.

Nansubuga hill is home to some of the endangered medicinal tree species such as the octopus tree (musanga), Macaranga, erythrina abysinica, ejjirikiti (the English may have no equivalent) and other hard wood trees such as Mushasha, Musiizi, Nkago, Mpewere. There are also various butterflies such as forest motter, black tipped diadem, the Ugandan hairsteak, mocker swallow tail and the citrus swallow tail.

As my weekend ended, I felt a part of me remained in this paradise that I promised myself a return experience when I am with great company; to take in that I alone could not muster.

Aggrey Nshekanabo is a travel writer with over 10 years’ experience in the tourism and development sector. 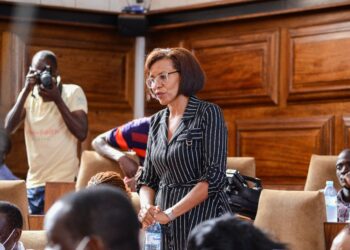 UTB, Jinja authorities partner to develop tourism in the city