ANDREW MWENDA: Mutebile, the passing of a legend who often faced a tough choice between what was politically unpopular but economically necessary 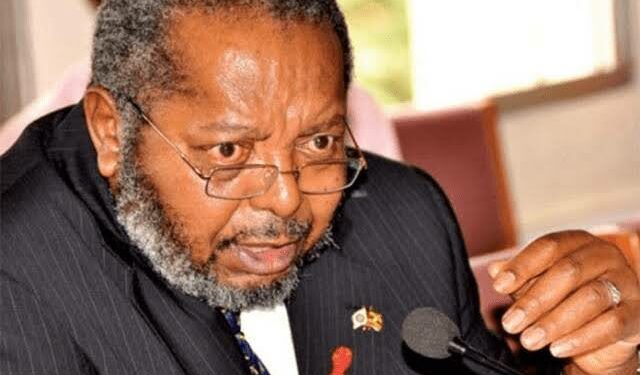 At exactly 5.30am on Sunday morning January 23rd 2022, the governor of the Bank of Uganda, Emmanuel Tumusiime-Mutebile, breathed his last in a Nairobi hospital. He had been battling illness for several years. While Mutebile’s body has died, his deeds will continue to live in the memory of those he impacted and in the consequences of his decisions and actions. This is because at the end of our lives, a question stands: what did you do with your life? For many, a good and fulfilling life is service to themselves and their families. For others, a life well lived is a balance between the personal and the community. Mutebile balanced the two very well.

Mutebile enjoyed a long and distinguished career in public service. And he served this country with integrity, dedication and distinction. In 1980, he was a Principle Private Secretary of President Godfrey Binaisa and later Paul Muwanga when he has head of state. Then in 1981, as vice president, Muwanga recommended him to President Milton Obote to be government chief economist. Just before he was overthrown in the military coup July 1985, Obote says he promoted Mutebile to be Permanent Secretary Ministry of Planning and Economic Development. The appointment does not seem to have taken effect during the short-lived presidency of Tito Okello. When President Yoweri Museveni came into office he confirmed him as PS. It is a mark of his social skills that he served these governments continually without blemish or getting killed.

It is under Museveni that Mutebile achieved his iconic status. He became the champion and leader of the group inside the government in favour of liberal economic reforms. This was actually a risky leadership position to take. NRM had come to power as a left-wing organisation hostile to IMF and World Bank sponsored Structural Adjustment Programs (SAPs). These reforms had been implemented by the Obote administration but had faced severe criticism from the NRM, then a rebel movement in the bush. Mutebile was a leftover from the Obote government even though in 1980 he had supported Museveni’s political party, UPM.

Upon coming to power, NRM rejected SAPs, re-instituted government controls over the economy by fixing the foreign exchange, imposing price controls on essential goods, pursuing barter trade, etc. This was a big mistake. It was assigning the role of economic management and control to a state that had atrophied, its institutional integrity eroded by corruption and speculation. The country’s entire productive economy had broken down. Most industries were in a state of disrepair while most farmers had withdrawn from commercial to subsistence production. There was no foreign exchange to import spare parts to repair industries or import fuel to ensure movement of people and goods. The treasury was empty, so the state could not effectively perform its basic functions of ensuring law and order or the delivery of basic public goods and services.

The NRM needed foreign assistance to perform these basic functions as a way to stabilise and consolidate its rule. But this was the time of reform (glasnost and perestroika) in the former Soviet Union and her satellites. NRM’s ideological allies in the East could not help. So, it turned to Western countries. These insisted on an agreement with IMF before they could open their cash taps. The IMF in turn insisted on SAPs as a precondition for any funding. The NRM government was in a desperate situation. It accepted IMF conditions out of desperation not out of conviction. This ignited an intense debate inside the government on the policy direction the country could take.

It is in these circumstances that Mutebile exhibited his qualities both as a pragmatist and as a leader. Around him at the ministry of planning, he had surrounded himself with a team of junior technocrats including Chris Kasami, Keith Muhakanizi, Damon Kitabire and Florence Kutesa. Opposing them were senior technocrats at the ministry of finance led by the minister, Cryspus Kiyonga, and the Secretary to the Treasury, James Kahooza. The key decision making body where these debates took place was the Presidential Economic Commission (PEC) chaired by Museveni himself. NRM heavyweights on the commission with strong left-leaning ideological convictions included the formidable Eriya Kategaya, the indefatigable Ruhakana Rugunda, Dr William Kaberuka, etc.

The debates in PEC were intense sometimes even heated to boiling point. Mubebile and his team (all technocrats) argued strongly for liberalisation while their opponents (mostly original NRM left wing cadres) defended continued state control of the economy. Over a series of these internal debates lasting over five years, Mutebile and his side carried the day. After a small economic glitch in 1992, Museveni fired Kiyonga, merged the ministry of finance with that of economic planning and made Mutebile PS/ST. It is a mark of Mutebeli’s courage and resilience and of Museveni’s pragmatism that the neoliberal side won this debate.

Government began by liberalising the exchange rate which also meant devaluing the shilling. In December 1989, at a high-powered “Seminar on the National Economy” Mutebile defended devaluation as a pro-export incentive and argued that “a realistic exchange rate” was necessary for economic recovery. In a decision that exceeded donor expectations, seminar participants resolved that “since [the foreign exchange] market exists as a fact, it should be formalised and taxed”. The parallel market was effectively legalised in 1990, and the differential between the official and free-market rates narrowed to only 15% by September 1991.

From 1992 henceforth, Mutebile became the most influential figure in Uganda’s economic policy orientation. The country moved fast to control inflation, streamline the budget making process, privatise public enterprises, retrench the army, disband state monopolies, remove price and foreign exchange controls, reform the civil service, create specialised agencies like URA and UIA to manage strategic sectors of the economy, introduce VAT, deregulate most economic activity etc. Uganda became the leading reformer in Africa, and a darling of the IMF, World Bank and other Western donors. Mutebile, supported and protected by Museveni, was the fount and matrix of this roller costa reform program.

In November 2000, Mutebile left the ministry of finance to become governor of BOU. There, he consolidated the independence of the central bank and continued to influence fiscal policy through his colleagues at the ministry of finance. Other than Museveni, Mutebile was the most consequential player in Uganda’s economic reform and recovery. Because of his bold stance, our country has sustained an average rate of growth of 6% over 35 years, making it the 11th fastest growing economy in the world, the 4th in Africa. Yet Mutebile never bragged about this. And of course, like all good things, Uganda’s reforms had a downside, a discussion of which is beyond the scope of this eulogy.

Throughout his career at planning, at finance and later at the central bank, Mutebile often faced a tough choice between what was politically unpopular but economically necessary. He learnt how to balance the two. He was, at his core, a very courageous and honest man blessed with an unusual integrity. He could take a firm stand against all odds if he was convinced about something, and yet was always willing to reconcile (or even compromise) economic and technical principles with political and social reality. It is inconceivable that without him, Uganda would have navigated the treacherous terrain of painful economic reform that it did.

The distinctive aspect of his leadership was an ability to inspire his subordinates to higher ideals, keep them loyal and united to the cause and defend them without fear or favour and even protect them from politicians seeking to settle political scores. It is this quality that facilitated his ability to build enthusiasm and confidence around liberal economic reform, and organise and sustain a team that was confident in its policy beliefs. He also believed in technical competence and had little or no regard to considerations of identity. It is this aspect of his personality that made it possible for him to build a formidable team of highly competent technocrats at the ministry of finance that midwifed our country’s recovery.

At Bank of Uganda, he inherited an institution that was already solid and sound. But as he grew ill and weak, some of his lieutenants whom he trusted began to undermine him and build cliques in the bank. He always believed in the power of delegation. In his last ten years, those to whom he delegated pursued their own selfish agendas and this cost the central bank its reputation. The arbitrary use of power that was exposed during the COSASE investigations only showed how weak and out of touch he had gotten and how much he had been betrayed by those he trusted. Mutebile remained a free marketeer, believing that sound macroeconomic management demands control of inflation almost as an end in itself.

At a personal level, I made Mutebile a friend and regularly visited him at his office or his home. Sometimes we went out to lunch or dinner together. When I introduced him to Spectrum restaurant, he made it his favourite place, often inviting them for outdoor catering whenever he had an event at his home. When I was a radio show host of Andrew Mwenda Live on KFM, Mutebile was a regular on my show do discuss economic policy. Throughout all this time, we remained close even when we disagreed. But I admired him immensely – his intellectual depth, his personal charisma, his strength of character and courage and his boldness.

As his illness intensified, I was saddened to see him slowly lose his energy and vitality, yet this was only in his body. For the most part, he retained his intellectual rigour, able to hold his own in any economic policy debate with whomever he met. Last year, the French ambassador asked me to request Mutebile to join him for lunch at his residence. When he arrived the residence, he insisted that he would only get out of the car if I was personally there to received him. I went over and helped lift him out of the car – with his bodyguards. We helped him walk to the dining and take a seat. Yet although he was in extreme physical difficulty, he was mentally astute.

As soon as he sat down and over lunch, the old Mutebile came to life again. He was in a jolly and ambient mood as he discoursed on economic policy. And he did this with the flair of a journalist and the depth of a scholar. But his illness had taken a big tall on his ability to perform his official functions. He spent a lot of time away from office – at home on treatment. He finally succumbed to the inevitable with dignity and honour. It was a blow for many of us who admired him and became his friends. He gave unusual access to journalists and was always open to discuss economic policy with anyone who dared challenge him. It is very sad indeed that we lost such a giant at a tender age of 72. May his soul RIP.