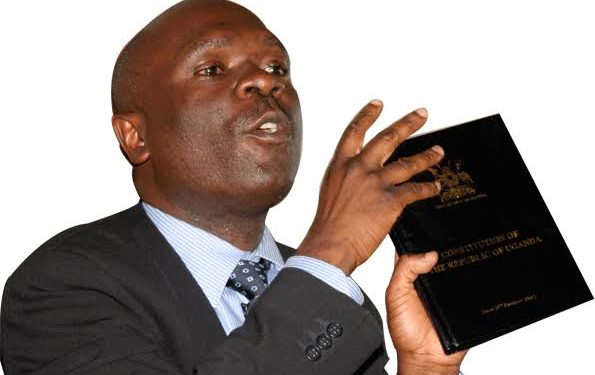 Yusuf Nsibambi is the newly elect Member of Parliament for Mawokota South.

Despite being a new entrant in Parliament, the Forum for Democratic (FDC) founding member has already expressed interest to become the next Speaker of the August House. He will be facing off with the likes of Kampala Central’s Muhammad Nsereko, David Bahati of Ndorwa West, Thomas Tayebwa of Ruhinda North, Bukedea Woman MP Anita Among, Jacob Oboth Oboth of West Budama among others.

Nsibambi says, the current deputy speaker Jacob Oulanyah whom he taught Law at Makerere University has not performed according to Ugandans expectations.

‘’I think he has served the interests of the ruling government well, leaving Ugandans aside,” he says.

Nsibambi hopes to change the tide and roar for the Deputy speaker’s slot in the eleventh parliament.

“A good parliament is everyone’s dream. A good leader is every citizen’s dream but here it is the vise-versa. They pass laws in conformity of the ruling government,” he said.

Nsibambi added that matters conducted in the parliament should be independent and they should be in favor of the Ugandans.

Before becoming MP, Nsibambi, a lawyer by profession was known for his business venture Jalia City and his law firm Nsibambi Advocates.

“I wasn’t so much in politics but on a local level those that knew me loved my work as a committed lawyer,” starts Nsibambi.

Nsibambi is too receptive, jental and eloquent on the current affairs in the country.

He loves books, law and politics and FDC, a party he has had a strong attachment way back during the days of Dr Kizza Besigye.

Nsibambi is quick like a wink to share that walking his way into parliament has not been an easy journey.

He had to work hard like a Trojan, race like a horse to convince the people of Mawokota South Constituency to vote for him.

About the current governance, leadership and the state structure, Nsibambi says that Mr Museveni is boldly obsessed with power than looking for solutions on the problems that affect the citizens.

“The society and trust among Ugandans are falling into piece at the very fast rate and the root cause of it all is Mr Museveni’s greedy for power,” he added.

‘’Ugandans are committing all sorts of crime so that they get money to pay for school fees for their children.”

He ponders that the way Museveni governs the country makes one believe that he is above the tribulations of this wrenched world.

“He (Mr Museveni) is like a disgruntled hyena roaring for more rabbits to eat,” he says.

He went to Nkozi primary school, Kibuli secondary school for O and A-level and then Makerere University for a bachelor’s degree in Law which he completed in 1989.

After university, he joined Sebalu and Lule advocates for one year before joining Greenland bank. In 1995, he did a master’s in International Financial Crime at the University of Florida.

Nsibambi also says that the money Museveni spends recklessly on the state only the devil can count.

Nsibambi says it’s a hundred times immoral but they make Ugandans sound simple and virtuous on their own property.

“A lot of funny things in the parliament. Many leaders have abused their potential, wander in all directions to please Mr Museveni,” he added.

Many leaders both in the local and central government believe that Museveni is the modal answer and the potent of truth which he disagree with.

He added that initially, Museveni had hearty ideas for this country but later changed the dimension of governance like chameleon.

“The parliament is not structured out, and that’s why some leaders are raw and unbalanced,” he added.

Mawokota South Constituency is just 35 km away from Kampala.

“It should’ve been the food basket of people but the government has not seen value and pride in developing it,” he added.

Nsibambi is also juggling politics and business at ago. He is the proprietor of Jalia City, a resting place in the heart of Mpigi District.

He says the best at hate are those that preach love and the whole system is embedded with mafias.

As a way forward, Nsibambi says a National Conference is needed, religious leaders should also be considered.

He says since 1962, Uganda has not had succession plans and the whole Country is sitting on the furnace.

“The way they arrested Kyagulanyi during the elections period was a sign of violating his rights. I think Mr Museveni must smart-up,” he added.