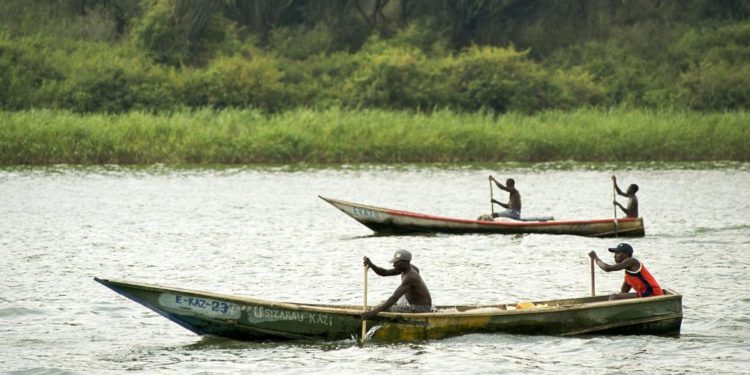 Tension and fears have continued to rise at Rweshama fishing village along Lake Edward in Rukungiri district as two fishermen were last evening kidnapped by Congolese game rangers as they ventured into the lake to do fishing.

The kidnapped have been identified as Sunday Justus and Bendan Mwesigye both workers of Muzaifa Baribaseke.

Muzaifa told our reporter that his boat Reg. no Ug.44 was taken with fishing nets by the Congolese game rangers and his workers adding that up to now reasons for the kidnap are still unknown.

He however said that plans of rescuing efforts are underway and that he had talked to the kidnappers and they asked for money worth 1 million to have his boat, boat engine, fishing nets and workers returned to him.

When contacted for a comment, Capt. Favorite Rwogamu, the Uganda marine forces spokesperson said the fishermen were yesterday evening kidnapped by the Congolese game rangers together with their boat Reg. No. Ug 44 adding that reasons for their kidnap are still unknown.

Capt. Rwogamu added that plans for rescuing them are underway and that he had already talked to the kidnappers adding that the government of Uganda is yet to agree with the Congolese government on terms and conditions of releasing the kidnapped fishermen.

Isaac Tugamisirize, the area councilor said that the only problem is the marine forces that have stopped locals to directly deal with kidnappers saying that whenever a kidnap would happen, the locals would find it easy to resuce their people.

He says that nowadays they are denied a chance of rescuing their people adding that they are told not deal with kidnappers but only allow the government to deal with them and their people end up dying in Congo a thing he said to be taking away the lives of their fellow fishermen.

This is not the first time Ugandan fishermen are being kidnapped by either Congolese militia groups or by Congolese army. In May 2018, 6 Ugandan fishermen were kidnapped but only one was released, in August 2020, 10 were also kidnapped and only one has so far been released and the rest are in the hands of Congolese government according to Bernard Baingana, the marine operations officer at Lake Edward and George.