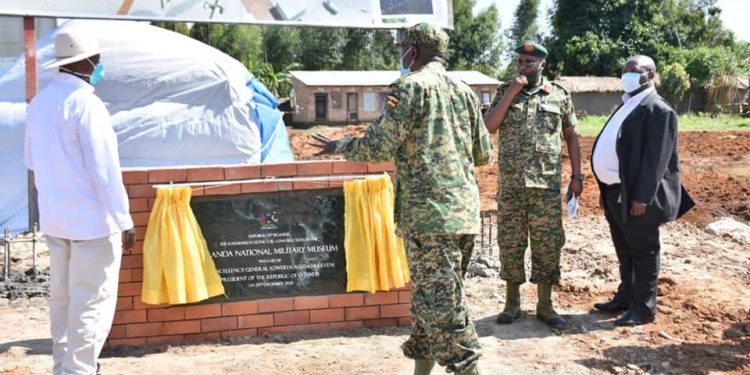 The President of the Republic of Uganda and the Commander-in-Chief of the Uganda Peoples’ Defence Forces Yoweri Kaguta Museveni on Tuesday laid a foundation stone to kick start the construction of the Uganda National Military Museum at Katonga Bridge, Mpigi District.

Speaking at the Launch of the Defence Forces Activities to mark the 40th Anniversary of the birth of UPDF, the Commander-in-Chief, Gen Museveni thanked the UPDF and the Department of Doctrine for finally documenting the unique and special history of NRA where ordinary people without significant external support and a rear base took up arms and defeated a national army routed in colonial history.He added that this hasn’t happened in many parts of the world with the exception of Cuba and China. He said this offers people an opportunity to study and understand the factors that helped the struggle to succeed.

The president applauded Lt Gen Pecos Kuteesa for having chosen the site of Katonga to set up the National Military Museum. “This is a better business proposition. Because people here will stop on the way to Queen Elizabeth, Bwindi.” said Museveni . He noted that Katonga is not only unique to the NRA but it was also an epicenter in 1979 between Brigade 201 of the Tanzanian Army and Amin’s Army with the Palestines.

The minister of Defence and veteran Affairs, Hon. Adolf Mwesigye thanked the President for taking time to grace the occasion of commissioning the Military Museum and launching the activities leading to the celebration of 40years of UPDF. “Ugandans have all the reasons to celebrate the 40 years of UPDF because over this period, the National Resistance Army now UPDF has made a lot of fundamental achievements with securing the lives, property and indeed the future of the people of Uganda and consolidating the total peace in Uganda which we are all witnessing today.” said Hon. Mwesigye.

He commended the predecessor of UPDF, NRA for the tireless efforts towards ensuring that Uganda as described by foreign visitors and investors as a land of peace, prosperity and an island of peace in the Great Lakes Region. He added that the UPDF is now a Professional Force with robust human and technical capability to protect and defend the territorial integrity of Uganda.

The Chief of Defence Forces, General David Muhoozi in his remarks said that the 40th Tarehe Sita anniversary will be conducted under the theme “Celebrating UPDF at 40 Years: Fruits of a fulfilled Partnership of Maintaining and Consolidating the People’s Security, Stability and Prosperity.” He added that the UPDF will carry out a wide range of activities which are meant to give back to the community as part of the UPDF’s Corporate Social Responsibility that will include; Medical Outreach activities, sanitation and hygiene, civil engineering works, education and sports support related activities among others.