UPDF flags off 1,700 soldiers to Somalia 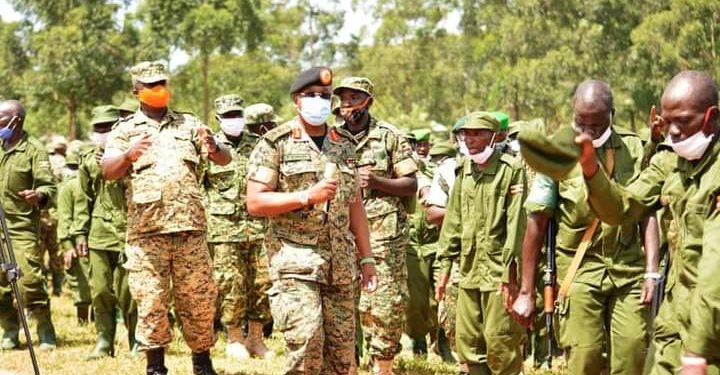 The Chief of Staff, Land Forces, Major General Leopold Kyanda, has today flagged off Battle Group 31 comprising of 1,714 troops heading to Somalia to serve under the African Union Mission in Somalia (AMISOM).

Addressing the troops and officers at the flag off, Maj. Gen Kyanda called on the troops to build on the discipline and successes of the predecessor battle groups that have been instrumental in the pacifying of Somalia. He noted that the pacification of Somalia is crucial in the stability and development of not only Uganda but other African States. While giving the troops and guests a general overview of the situation in the country, Maj. Gen. Kyanda said that it is the Constitutional obligation of the Uganda Peoples’ Defence Forces to preserve and defend the sovereignty and territorial integrity of Uganda and to also foster harmony and understanding between the Defence Forces and Civilians.

Maj. Gen. Kyanda thanked the government of Somalia and the African Union for agreeing to stabilize Somalia where Al-Shabaab terrorists had created insecurity that led to disunity amongst the Somalis and destabilization of Somalia. He underscored the importance and need of the troops to be disciplined, patriotic in carrying high the flag of Uganda. He reminded them that the participation of the UPDF in AMISOM is in line with the principle of Pan-Africanism. “Your positive contribution will lead to the realisation of Uganda’s vision of Pan-Africanism, social and economic transformation”. Said Maj Gen Kyanda.

He cautioned the soldiers against living lives of promiscuity, drunkenness, corruption while reminding them that both COVID-19 and AIDS are real and it is their duty to stay healthy.

In his remarks, the Commandant of the Peace, Support Operations and Training Centre, Brigadier General Bonny Wolimbwa commanded the group for their cooperation and having endured the training especially towards following the Standard Operating Procedures to guard against COVID-19. He noted that while they were supposed to be deployed in August, circumstances couldn’t allow them to be deployed then. He further said that the Training Centre has now developed capacity to train and deploy to mission areas with limited support from partners.

He stressed the need for the troops to be good ambassadors of the country and ensure the success of the mission. Brig Gen. Wolimbwa also reminded the troops that they need to endure because COVID-19 is real and kills and thus they need to keep themselves safe while protecting others.

The flag off was attended by senior UPDF officers and partners.