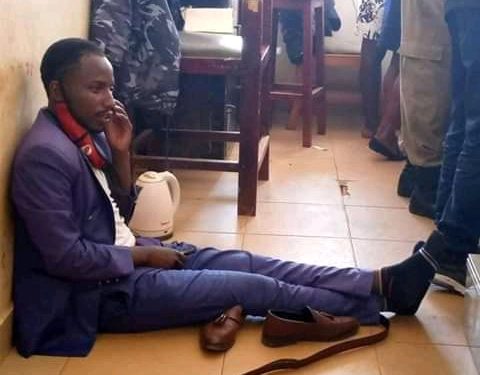 The National Unity Platform (NUP) General Secretary for Kigezi Region Derrick Kateebire has been arrested by police in Kabale Municipality.

Kateebire was arrested by Anti riot police personnel at around 11:00am in Kabale town and whisked away to Kabale central police station. Kateebire is also the NUP flag bearer for the LC IV Councillorship seat in Central division Kabale Municipality.

He was arrested with placards with words “we want our banner you stole from Esso lorry park, Kabale RDC and DPC stop harassing coordinator Kateebire, Kabale DPC Brian Ampaire, and As NUP, we are ready to secure the future ourselves”.

Kateebire told journalists at Kabale Central Station that, he was arrested by police at Garage Street in Central division as he was together with other five NUP supporters mobilizing others to go to Kabale Central police station, to inquire why their posters and banners of the NUP presidential candidate Robert Kyagulanyi have always been confiscated and defaced by police from Esso lorry Park and other areas.

The Kabale District Police Commander Brian Ampeire confirmed the arrest of the suspect on the charges of doing an act that is likely to spread an infectious disease. He said that it’s not the role of police to confiscate the posters of candidates therefore Kateebire’s claims that police stole their candidates’ posters are baseless.

However, Kateebire’s lawyer of Bitwenda and Company Advocates Godwin Masereka said that the charge against his client contravenes the law, because he was arrested when he had not held the demonstration. He added that what shocked him is to deny him police bond claiming that he uses abusive language to security personnel.

This is the second time Kateebire being arrested on the same charges, on 3rd November this year when he was reportedly planning a procession in town to celebrate the nomination of NUP presidential flag bearer, Robert Kyagulanyi Ssentamu alias Bobi Wine.

UPDF flags off 1,700 soldiers to Somalia