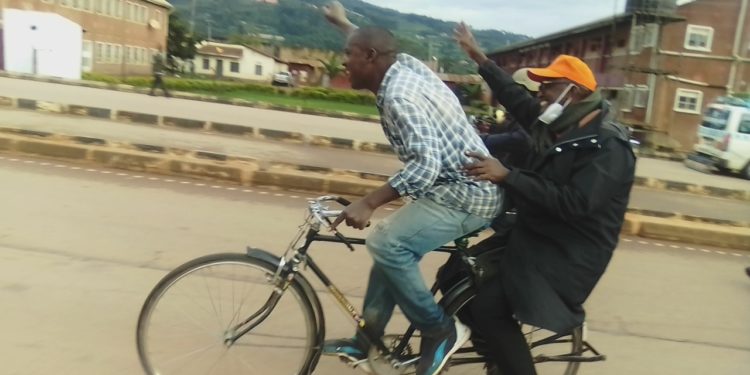 Gen Tumukunde on a bicycle

Lt. Gen (rtd) Henry Tumukunde on Wednesday evening while in Kabale town chose to move on a bicycle while campaigning after arriving late from, Rukiga District.

As he arrived in Kabale town at around 6:00 pm, the presidential candidate chose to move on foot only greeting people, before he opted to move on a bicycle waving to them.

He was lured by a yet to be identified rider to sit on his bicycle and Tumukunde saw it as a big deal.

Earlier in the day, Tumukunde passed through town enroute from Kisoro but met no people as it was heavily raining. He would have preferred to hold a rally in town but he didn’t because it had surpassed campaign time, as guided by the Electoral Commission.

Tumukunde, who was scheduled to campaign in Kabale at 11: 00am didn’t appear as he had reportedly traveled to Kisoro where he had missed campaigning on Tuesday.

However, he was blocked by security, saying he would not be allowed to cover it unless he gets permission from the Electoral Commission.

On Tuesday, Tumukunde also clashed with police in Rukungiri as he kicked off  his campaigns where some of his supporters were blocked from the campaign venue. Police fired teargas to disperse them.

Gen. Tumukunde is contesting as an Independent candidate but is running campaigns under his pressure group, a Renewed Uganda.

Financial expert explains why most Ugandans fail to save money