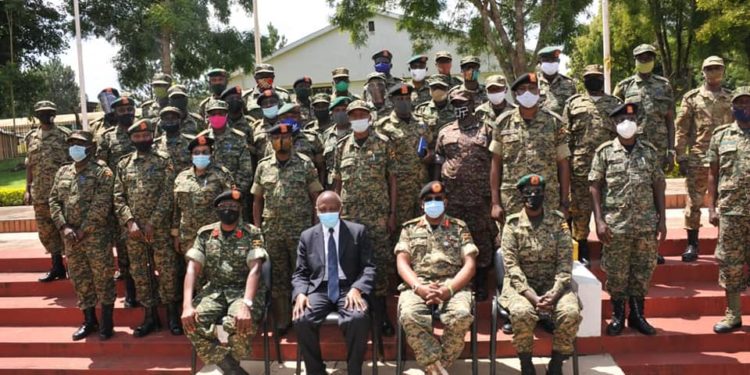 The Ministry of Defence Directorate of Veteran affairs through Chieftaincy of Pension and Gratuity (COPG) has concluded a 3 days symposium for all the Zonal Pensions Officers (ZPO’s) at Land Force Headquarters Bombo.
Chief of Staff Land Forces (COS-LF) Maj Gen Leopold Kyanda on behalf of UPDF (JCOS) commended the ZPO’s for the work well done and for having bridged the gap between the veterans and the Ministry of Defence top management.

Maj Gen Leopold Kyanda urged them to continuously close the information gap between MODVA headquarters and the veteran community spread all over the country.

He thanked them for facilitating the documentation of a large number of veterans in the backlog category enabling government to pay their benefits with confidence that they will go to the rightful beneficiaries.

Gen Leopold Kyanda however urged the ZPO’s to always put in mind that Directorate of Veteran Affairs envisions a Uganda Military Veteran Community, which is vibrant, productive and contributes to National Security and development of the country.

The Director Veteran Affairs Brig (Rtd) Emmanuel Musinguzi thanked the ZPO’s for having served the veterans community diligently hence the existing milestones within of the directorate.

Brig Musinguzi reminded the ZPO’s that the UPDF has contributed greatly to stabilization of the country and the Great Lakes Region; adding that this contribution has been achieved with meager resources but with great sacrifice and dedication to the cause by individual officers and men.

The force multiplier in all this being each of them believing that their individual contribution, however small, has a significant bearing upon a well-articulated greater purpose.

He therefore called upon the ZPO’s not to be part of the claimant’s problems but be part of their solutions by always handling their files with care and empathy because they have alot of needs.

Brig Musinguzi stressed that if the veterans are served well it will continue to promote the UPDF as a force that cares for its own thereby encouraging more youth to join.

The ZPO’s have been taken through documentation and information management, computation of terminal benefits and compensation, customer care skills fraud presentation, and verification and validation of claim document among others.

Col Kefa Nangeso Chief of Pension and Gratuity thanked the Ministry of Defence and veteran Affairs for having accorded the Chieftaincy all the necessary support needed to execute their duties.

The issue of unpaid veterans has for long dragged on until a robust team was formed at the Directorate if Veteran affairs and UPDF Chieftancy of Pensions and gratuity to solve the problem once and for all.