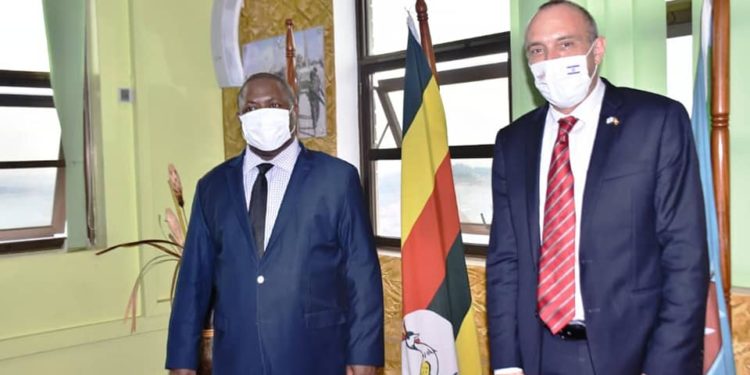 The Minister of Defence and Veteran Affairs Adolf Mwesige has met with the Ambassador of Israel in Uganda His Excellency Obed Joseph.

The meeting, at the Defence Ministry headquarters in Mbuya, was aimed at deepening the existing defence cooperation between Israel and Uganda.

Mwesige applauded the Government of Israel for the existing good relations with Uganda in other areas like agriculture and international relations, noting that defence cooperation deepens the continuity of the much needed prosperity. “Focusing mainly on defence cooperation, not in words, but in practice between the two countries increases performance in many socio-economic sectors,” said Mwesige.

Ambassador Obed Joseph commended UPDF and its leadership for the support and involvement in keeping peace and stability both in Uganda and in the region.

He noted that this is premised on the earlier peace normalization meeting between the Prime Minister of Israel Benjamin Netanyahu and President Yoweri Museveni when the duo met in Uganda.

The Israel Ambassador in Uganda raised concerns channeling Uganda’s defence ministry to concretize its Memorandum of Understanding (MOU) with Israel on shared security challenges and how they can be addressed.

“A steering committee on defence dialogue to outweigh challenges in a specific area is important,” he elaborated, and further proposed the need for Uganda to host a regional seminar between military colleges in East Africa to identify more opportunities and threats to regional stability.

The Chief of Defence Forces Gen David Muhoozi alluded to the fact that completing negotiations that will pen-down the MoU on Defence Cooperation between the two countries will enhance UPDFs defence capabilities.

The meeting was also attended by the Ministry of Defence and Veteran Affairs (MODVA) Under Secretary in charge of Finance and Administration Mrs. Edith Buturo who represented the Permanent Secretary, UPDF Chief of Personnel and Administration Maj Gen George Igumba who represented the UPDF Joint Chief of Staff and the Honorary Counsel State of Israel Mrs. Ishta K. Muganga.