by Lawrence Kazooba
in News
14 1 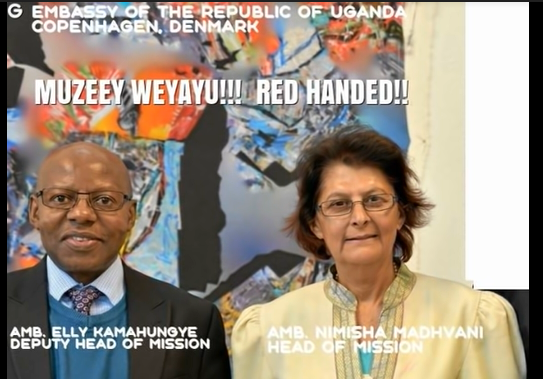 Even as Covid-19 continues to ravage the country, Uganda’s top diplomats in Denmark have been shamed that they have not integrity. The disgraced diplomats, although recalled, exhibited in a Zoom teleconference what they have been to all this while – stealing government funds for personal pleasure.

The revelations come in an audio tape in which the top embassy staff including head of mission, HE. Nimisha Madhvani and her deputy Amb Elly Kamuhungye, and other staff, are heard plotting to steal government cash instead of returning it the consolidation fund where remaining money is taken after the end of the financial year.

The thief in command, is newly appointed deputy Kamuhungye, who preached to steal as a team, as his new strategy to create cohesion at the Mission.

He said “teamwork” allows them to steal government funds and share it across staff, without one raising the dust. At some point a proposal to compromise auditors is tabled, to help them maneuver the accounting malaise.

After the expose, the Permanent Secretary ministry of Foreign Affairs Amb Patrick Mugoya wrote a letter expressed grave concern on the allegations leveled against the senior embassy officials. He said the ministry is investigating the audio and details in the meeting.

Amb Mugoya said the ministry in consultation with the permanent secretary to the treasury and the auditor general will carry out a thorough investigation into the matter.

“Meanwhile the officers implicated have been recalled to the ministry headquarters to pave way for investigations. Depending on the outcome of the investigations additional measures may be taken as appropriate”, statement by Amb Mugoya says.

Ambassador Madhavani, a member of one of Uganda’s most prosperous families, is head chairing the meeting in which she is concerned about closing gaps in accounting as well as not being caught pants down.

Nimisha, who wants a “clean record” in her job, courts lots of controversy. Just recently, she was caught in a web of fighting for family wealth, after her brother Nitin accused her of holding out as a director in the Madhvani Group of companies and abusing her power in order to gain control of the family’s assets.

Nimisha’s name is also on the list of powerful people who took advantage of loopholes in the Departed Asians Custodians Board, and acquired properties of Asians who were expelled from Uganda in 1972 by dictator Idi Amin. Nimisha is one of the biggest landlords arising from sharing the unclaimed Asians properties.

This Zoom meeting however exposed Ambassador Nimisha Madhvani, the Head of Mission at the Ugandan Embassy in Denmark, and her deputy, Ambassador Elly Kamuhungye, as crafty, corrupt and pen thieves.

The Zoom meeting discussed among other things how staff can use government money to buy themselves comfort in Denmark including purchasing personal sofas, dining tables, curtains, carpets, and paying out girls for sex.

The money which caught the country’s imagination was meant to mobilise and reach out to Ugandans in Denmark, especially those that wanted to be evacuated back home.

Ambassador Kamuhungye, who exhibited sophisticated stealing skills, briefed the meetings how each of the accounting gaps could be closed. He had an answer for every question.