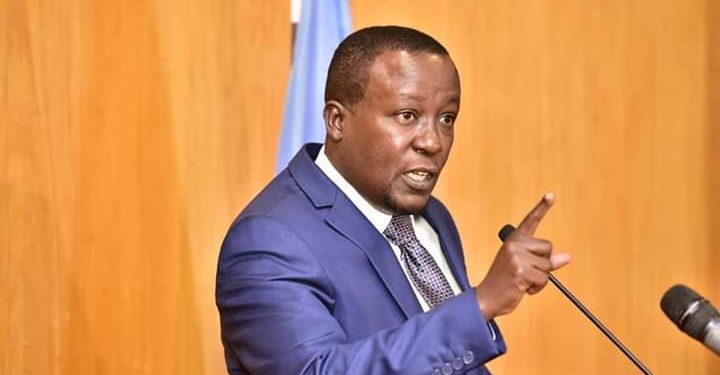 Until Wednesday, Joseph Kabuleta was believed to be running for Hoima Municipality Member of Parliament seat. He isn’t any more. Now, he is Presidential aspirant.

But why?
Because he wants to raise his profile, ahead of 2026 general elections. Period.

How do I know?

Kabuleta and his inner circle, believe, his 2021 presidential bid will elevate his stature to market himself better come 2025/26. Because, honestly, his eyes are set on the State House prize come 2026.

Therefore, as he internalised starting out as MP, he will get lost in Parliament as crowded with funny characters as the 11th parliament is destined to be come May 2021. That would soil him.

Like Yoweri Kaguta Museveni did in 1980 general elections, Kabuleta is not reinventing the wheel. It is better, therefore, to stand for president, set the bar high, sell his agenda, and consolidate it after 2021.

The 2021 election, is seen as a turning point for Uganda, where President Museveni is seen as serving his last term, and people like Robert Kyagulanyi, and Gen Muhoozi Kainerugaba, have emerged as top contenders in the run up for 2026 general elections.

Kabuleta wants to join the line up. And his cards are open.

With Gen Muhoozi and Kyagulanyi, well established political brands, Kabuleta hopes to turn tables, storm the dinner table because he knows no one will give him an invitation card, if he doesn’t invite himself.

On January 4, 2019 this website published an article saying Zoe ministries Prophet, Elvis Mbonye, had told his inner circle that Joseph Kabuleta, his chief media defender, would become president some day.

The article surprised many, and doubted Watchdog’s source of story. No wonder, on Sqoop magazine, an entertainment publication in Daily Monitor, followed up the story, and republished it, without citing our article.

This was our original article:

When we spoke to Kabuleta then, he was non committal and referred us back to Mbonye.

We have been tracking Kabuleta, since and seen his transformation over the year. And slowly, he came out of the shelf, a few months after our publication. He established several social media pages where he commented about politics. One of the articles actually landed him in the coolers. However, the arrest raised his political profile and identified him as a politician, and less as sports pundit.

It should also be noted that Kabuleta’s pastor, Elvis Mbonye, has insisted that he would anoint Uganda’s next leader. He actually says Kabuleta is destined to be that leader, and so are many of his followers to take up power in Uganda.

With this political season kicking in, Kabuleta showed interest in Hoima Municipality MP seat. In fact, he was cited on the ground in Hoima setting up cells to help him win the seat.

Fast Forward, on July 1, 2020, Kabuleta shocked everyone when he announced his Presidential bid.

Many of us were not surprised.

Mr Kabuleta known as the Watchman ministries lead pastor and a man offering media skills to defend Prophet Mbonye whenever he was under any attack, is now vying for the country’s top seat.

Joseph Kabuleta, a former sports editor at the New Vision newspaper, and sports pundit, is pursuing a divine calling.

When he announced his big to unseat President Yoweri Museveni in the 2021 general elections, he said he was ‘absolutely 100 per cent certain that he will be Uganda’s next leader.’

The rationale for his bid is ‘Financial Liberation’ and dismissed plans to join other opposition leaders to end Museveni’s 35 year old hold on power.

According to Remnants, the followers of Prophet Mbonye, under is under dark forces and there is need to liberate Uganda from them. This is ultimately Kabuleta’s number one objective.

“This oppressive regime is only as strong as the fear it imposes on the population. But when the people rise up, as we are doing now, they will encounter an empire that is very weak and crumbling and is there for the taking,” Kabuleta said during a press briefing in Kampala on Wednesday morning.

“Our desire for change must be stronger than our fear. We have a lot more to gain than we have to lose.”

He added: “There is a ceiling that has been built over the decades that separates the privileged few at the apex of the income pyramid…. But now we stand to Reclaim Our Country and Kin (ROCK).”

ROCK is Bible symbol, for Simon Peter on which Jesus Christ built the Church.

Kabuleta, has already written to the Electoral Commission to allow him hold countrywide consultations.

“People in power get all wealth and keep it for themselves. We are all supposed to be partakers of Uganda’s wealth,” he said before unveiling his ROCK’s colour, symbol and slogan.

About the need to join hands with other opposition leaders to oust Museveni, Kabuleta said he will only entertain such a union if they unite under him.

“Unless of course they have something better to offer than me. We want more than just change, there won’t be uniting of forces. Nobody has come out to say what they are standing for. I am standing for the financial liberation of this country in which we have been captive for 35 years. We have to stand up and fight we are tired of being nobodies in our country.”

“I am unique because the others that have stood up against him (Museveni) have nothing to offer. My message resonates with all Ugandans. I am the only one who can deliver what I am promising.”

His announcement brings the total number of presidential aspirants to more than 40.