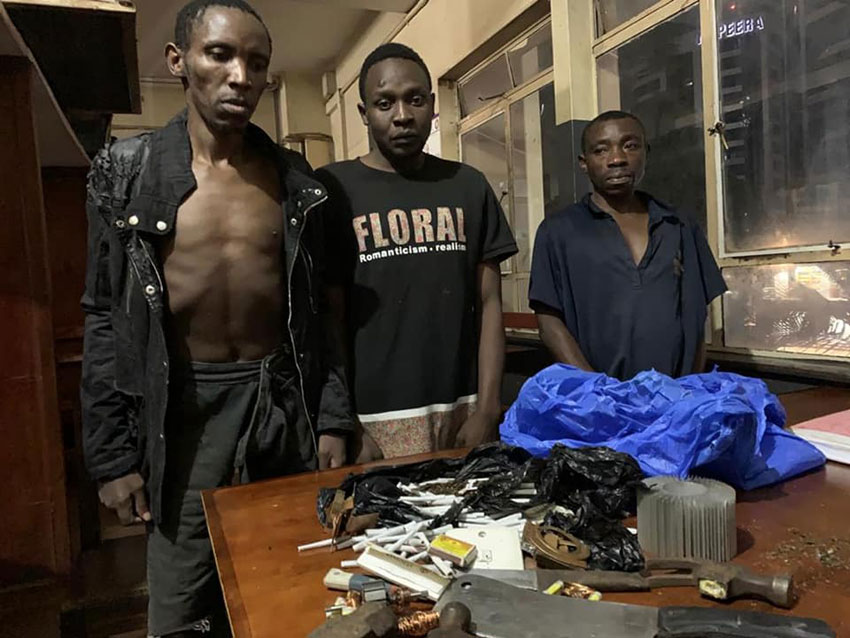 Police is holding three suspected robbers who tried to break into a shop in one of the arcades in the Kampala city centre on Tuesday.

The three; Abasa aka Duplicate , Sande Gerald and Nyenso Magisibo were netted red handed by the Central Police Station Kampala Patrol team during curfew hours. They were trying to break into a shop along Ben Kiwanuka Street.

According to Police, upon search , they were found with Knives , suspected narcotic drugs and breaking implements .

“It has also been established that one of them , Sande was previously charged with robbery in court last year and remanded to Luzira . Investigations are still ongoing and the trio will be arraigned before a court of law after consulting with the state attorney on the charges preferred. We want to assure the business community that , as they #stayhome , we shall strengthen our patrols , both foot and motorised in a bid of stopping such acts from happening,” Police posted on its official Facebook page on Tuesday.

Last month, President Yoweri Museveni  ordered for a raft of measures to curb the further spread of the coronavirus in the country.

Among the measures passed included; a ban on both public and private transport as well as a curfew for the whole country that starts 7pm to 6am for 14 days. The curfew however he said, would not affect cargo planes, lorries, pickups and trains.

President Museveni also suspended the opening of shopping malls, arcades, hardware shops which he said gather a lot of people to sell and buy non-food items.