by Stephen Kalema
in National, News
19 1 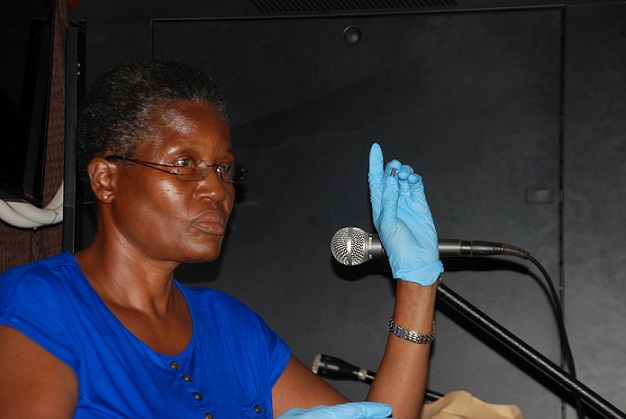 The trial of the businessman Matthew Kanyamunyu and his fiancée Cynthia Munwangari on Thursday afternoon continued at High Court, Kampala

Kanyamunyu and Munwangari are accused of shooting a child rights activist Kenneth Akena in November 2016. It’s alleged that Akena scratched Kanyamunyu’s car and when the former came out to apologise, Kanyamunyu shot him in the stomach.

Kanyamunyu and Munwangari denied the case which prompted court trials. So far 11 witnesses have appeared in court to pin Kanyamunyamu.

On Thursday, Robinah Kirenya, 58, a principal government analyst who has worked at the Directorate of Government Analytical Laboratory for over 25 years in Wandegeya, became the 11th witness in this case after detective Haruna Mugisha.

Before telling the court what transpired, Kirenya first explained the authenticity and confidentiality levels of any test done at their facility.

Kirenya said that she received two requests of tests from Police in correspondence to this case. However, the second request was dismissed by the court since it was about the third accused who was not in the court and trial judge Steven Mubiru guided the witness and her prosecutor to concentrate on evidence pinning the two accused people present in the court.

The first request was made on November 18, 2016 which had a projectile and was marked exhibit (1).

She added that exhibit 5 and 6 were motor vehicles 725G and 548M respectively, also they wanted her to examine and determine whether the two vehicles had ever come into contact. They also requested her to determine traces of gunshot residue on exhibit 6.

“Examination and tests were done, I wrote a report of the findings on May 31, 2017, I signed and I sealed it,” she added.

Kirenya said a projectile was a red bullet of the round nose and around ammunition of 1.22 LR inches, bearing 8 cycling impression which twists to the left and it was fired from a 2.22 firearm such as a pistol that twists to the right.

“Due to weight and the length of bullet or projectile, the most probable weapon to have been used as a pistol or a revolver. A revolver is also a pistol with a revolving chamber,” she explained.

As she was narrating her results to the court, the defence side asked for an adjournment due to time, Mubiru accepted their plea and adjourned the court to Friday 14, 2020 at exactly 9:00 am.

Meanwhile, during the crossing examination of witness 10, Hurana Mugisha which took place first, the defence side identified several loopholes in his testimony.

They said that the witness 10, did not present long shots of the photos of all exhibit he photographed. On the case of exhibits like the navy blue coat, trouser plus the long-sleeved sky blue shirt, they alleged that he did make long shots since there was a possibility of other courts, trousers and shirts present in the same location.

They also said that Detective Mugisha and colleagues didn’t carry out any fingerprint exercise which could pin the accused.

Also, failure to indicate in his report the type of the camera that took photos, the place where they were printed or developed also raised a possibility that they could have been taken by phones, however, Mugisha insisted that he took all the photos with a professional camera however he didn’t mention the type of it.