LIST Here are the best 10 musicians in Uganda 2020, and what made them successful

by Allen Kisakye
in Entertainment, Showbiz
31 2 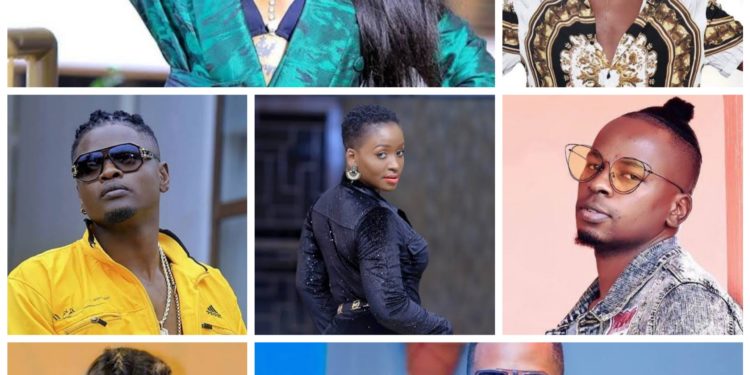 2020 will go down in history as the worst year performing artistes have ever had due to the negative effects of Covid-19.

Since March, 2020 when government declared a lockdown to control the spread of the pandemic in Uganda, the entertainment business has never been back to normal till now.

However, the lockdown didn’t stop some artistes from achieving success.It might not be too much but one is better than zero, especially during these hard times.

Many of these musicians have earned a lot from money paying content distributors like YouTube, Shazma, Itunes among others.Some have as well received endorsement deals, won awards (which come with fat envelopes), among other money generating avenues. In short,2020 has been their year.

In no particular order, here is our list of best musicians in 2020;

The usual suspect! Sheebah has continued to prove that she’s indeed a queen of +256. The singing sensational has been able to keep her music game on top despite the lockdown, Sheebah was able to release her 18-truck Samali album that happens to be a mega project for her career. This album comprises of songs like Nakyuka, Enyanda, Ninda, empeta among others which have topped most 2020 music charts and earned her a lot of money.

Kenzo is also one of the artistes who have had a great 2020 musically.Despite experiencing a rough moment when he got stuck in Ivory Coast following the Covid-19 lockdown, Kenzo has surely been on top of his game too. First, he ushered us into 2020 with his Tweyagale hit song, which is arguably one of the biggest 2020 jams with over 7 million views on Youtube. He has been able to win over five international awards thus putting Uganda’s flag high.He was also named the Uganda Tourism Ambassador. Surely 2020 has been his year.

Singing trio, B2C Entertainment are one of a few artistes who have had a blissful 2020 despite the pandemic. Actually, we can surely say that this was their best year ever since they parted ways with their former management (Andy Events). They were able to record a mega hit Munda Awo which saw their YouTube channel grow very fast, currently they are one of a few artistes who have a YouTube Silver button award, something that’s earning them millions. They have also recorded several hit songs like Awo, Wujja among others.

Pallaso has worked hard this year and we can proudly name him as one of the best artistes of 2020.He has released a couple of hit songs like Akomelerwe, Ekiro muzikiza among others, and when we thought that he is done, he slapped us with a mega hit song Malamu, which is currently one of the biggest jams around town, and in just a few months, this song already has 1 million+ views on YouTube.

From setting social media on fire with her constant ‘dimpled bums’ semi-nude pictures and dirty dancing with minors, we can’t fail to acknowledge that Winnie has also been on top of her game this year. She has so far released several hit songs like Jangu, Kwata Essimu, Everything among others which make ‘Fire Baby’ among the best acts of 2020.

He has recorded and written several hit songs for fellow artistes, but still released many hit songs under his name. This explains why no one complained about Andre’s MAMA Awards nomination for surely he has worked himself out and deserves a credit.He has released a couple of hit songs like Folo Folo, Tonelabila, Kyoyoya among others, not forgetting his mega 2020 hit Tugende mu Church.

He started doing music for fun, not knowing that a big breakthrough was waiting for him.Now a ‘joker’ is charging a lot of money for just a single performance. Panda became a must watch talent after his hit collabo Kyolina Omanya on which he featured Sheebah, and he later released other hit songs like Bino Byebiluma abayaye, Tuli Mu struggle among others.

Not only was she one of the artistes who made 2020 fun musically. Karole has proved to be the biggest dancehall female artiste of this year.She has released a couple of hit songs that have put her on the map like Binyuma, Balance among others.

Chosen is one of underrated artistes in Uganda but surely his talent can not go unnoticed.And in 2020 he has proved his worth. The singer has topped many charts with his singles like Nebakulabako, Sharp Shooter among other songs which have even made him a household name.

Knowing more about the 1xBet online betting company in Uganda