by Allen Kisakye
in Entertainment, Showbiz
155 2 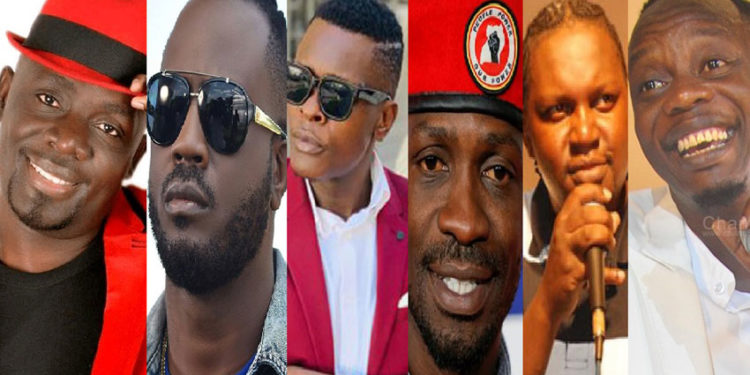 When they say that musicians are financially struggling, the statement doesn’t apply on all of them, since there are those who are living large, in terms of money, assets and investments.

We have tried to break down on how these musicians have managed to attain their wealth, and in no particular order, here are some of the richest artistes in Uganda.

The musician turned politician is arguably one of the richest musicians in Uganda. Besides the Millions he receives monthly as a Member of Parliament for Kyadondo East, Bobi Wine has a chain of investments, for example, One Love Beach Busaabala, Semakookiro Plaza, Kamwokya, a series of apartments in and around town, Taxis, Boda bodas among other things from which he collects his wealth. Bobi also has a beautiful home in Magere, Gayaza.

Chameleone also earned his spot on this list, he is one of the artistes who have, and still earn a lot through their music, he has accumulated wealth through album sales (iTunes, Spotify, amazon etc), endorsement deals, music tours both local and international. Chameleone was also ranked among the richest musicians in East and Central Africa by Nairobi News in 2019. The singer owns a beautiful house in Seguku, along Entebbe road and in Missouri, United States of America. He is also the CEO of Leone Island Empire, has a farm in Wakiso and Mpigi. He also owns posh rides.

His 15+ years in the industry didn’t go to waste, and surely Semakula can never starve even when his music stops paying. Currently this band musician earns a lot from his side businesses than in music. Semakula owns apartments in Zzana, Lubowa, Bumamwaya and Buwaate, owns Kann Records, He is also the owner a Papa’s Spot, one of the most happening hangout in Makindye- Lukuli Road.

He is Bobi Wine’s younger brother but his wealth has nothing to do with his big brother or politics. It’s his own hustle. Banjo has been so unlucky in music but he has managed to attain a lot of wealth outside the entertainment industry, and since he is an artiste, his name had to appear on this list. Recently he shocked Ugandans when he paraded a chain of his apartments, rentals, his multi-billion residential house among other things he has attained at his young age. He revealed that he earns over Shs200m monthly from his real estate business.

The singer has all the reasons to remain silent in the music industry basing to the wealth he managed to attain when he was still an active singer. ‘Jjaja’ Dee is the owner of Big Mikes Club in Kololo, Acacia Avenue, he deals in importation and renting of cars, has a multi million residential house in Makindye Kizungu among other properties.

Kenzo is arguably one of the most paid artistes in Uganda, he has managed to stage many international performances more than any other artiste in Uganda, and surely this has attained him a lot of wealth. The singer owns a house in Seguku, he is the CEO of Big Talent Records, Big Talent Soccer team, he has a series of rentals and apartments, a big farm in Masaka among other riches.

Lutaaya is earning a lot in silence, music might not be paying so much for him but he mastered the art of investing, something that makes him one of the richest artistes in 256. Lutaaya owns several hotels and restaurants in Makindye and Kabalagala, has apartments in Ggaba and Makindye, has a farm in Masaka, he is also the CEO of Da Nu Eagle, a band that’s still earning him a lot of money.

Bebe Cool earns a lot out of his music through stage performances, selling albums and endorsement deals. He owns posh apartments in Kiwatule, the Amber Hearts Foundation, and he is also the Ambassador of Tuberculosis in Uganda, a role that’s earns him millions of shillings.

The singer is into real estates and he owns a good number of apartments in and out of Kampala. He also owns Cream Production music band.