There was pomp and glamour at the Vietnamese Presidential Palace in Hanoi as President Yoweri Kaguta Museveni was being welcomed by his counterpart H.E Nguyễn Xuân Phúc.

Gen Museveni was received with a State and Ceremonial Guard of Honor by men and women in uniform.

During the 30-minute ceremony, Presidents: Museveni and Nguyễn shook hands with the joyous people welcoming the Ugandan leader standing by the side as a military band played the national anthems of both countries. 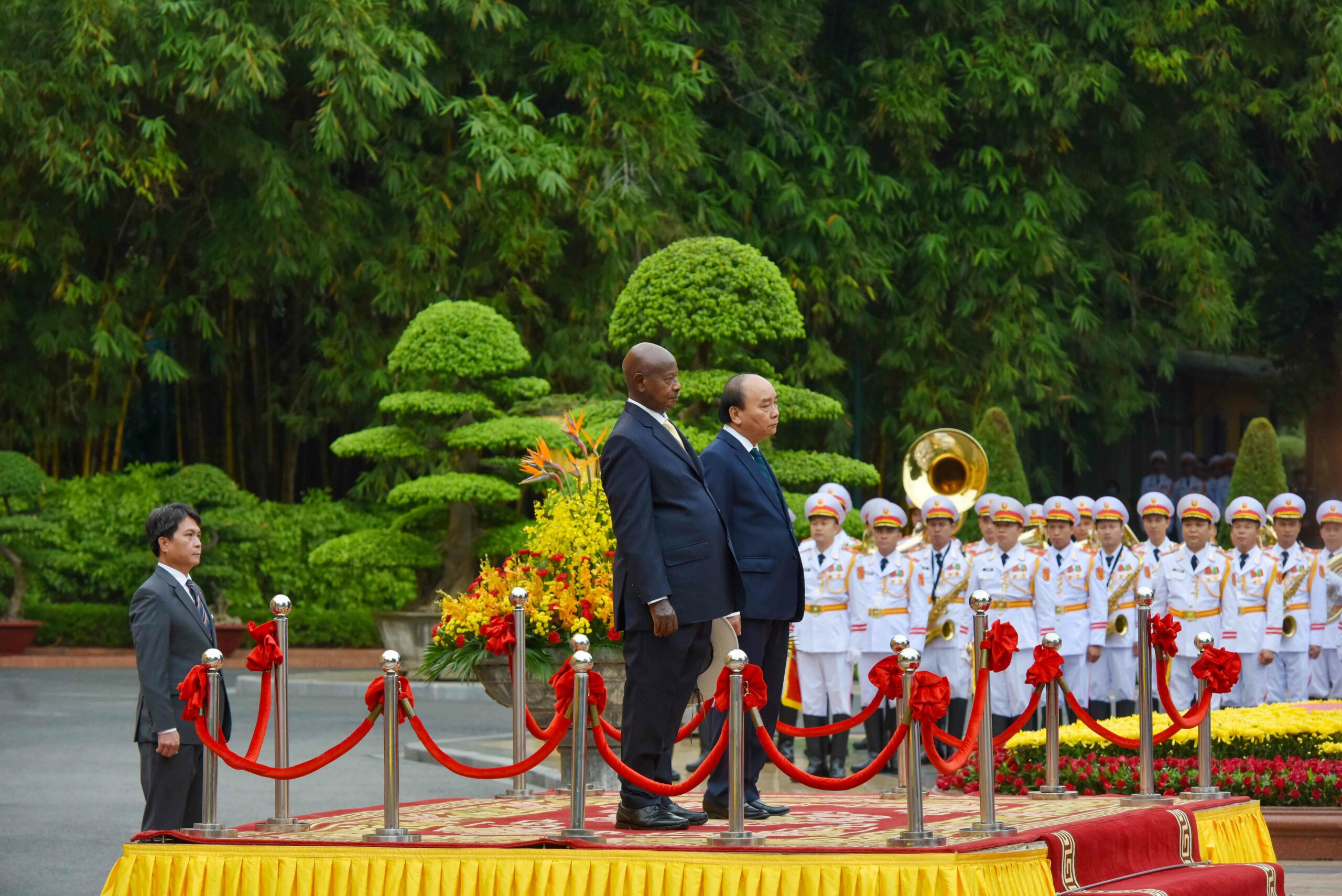 President Museveni inspected the Inter-Forces Guard of Honor before being ushered into the Palace by the leader of the Socialist Republic of Vietnam for bilateral talks.

H.E Nguyễn said, Vietnam has for long been following the developments in Uganda, and thanked H.E Museveni for maintaining political stability, social economic development and the fight against covid 19 and of late Ebola.

“I’m confident that Uganda will achieve more in its five-year plans of 2020/2021 to 2024 /2025 and realizing Uganda’s vision 2040 towards transforming Ugandan society from peasant to a modern and prosperous country,” H.E Nguyễn Xuân Phúc said. 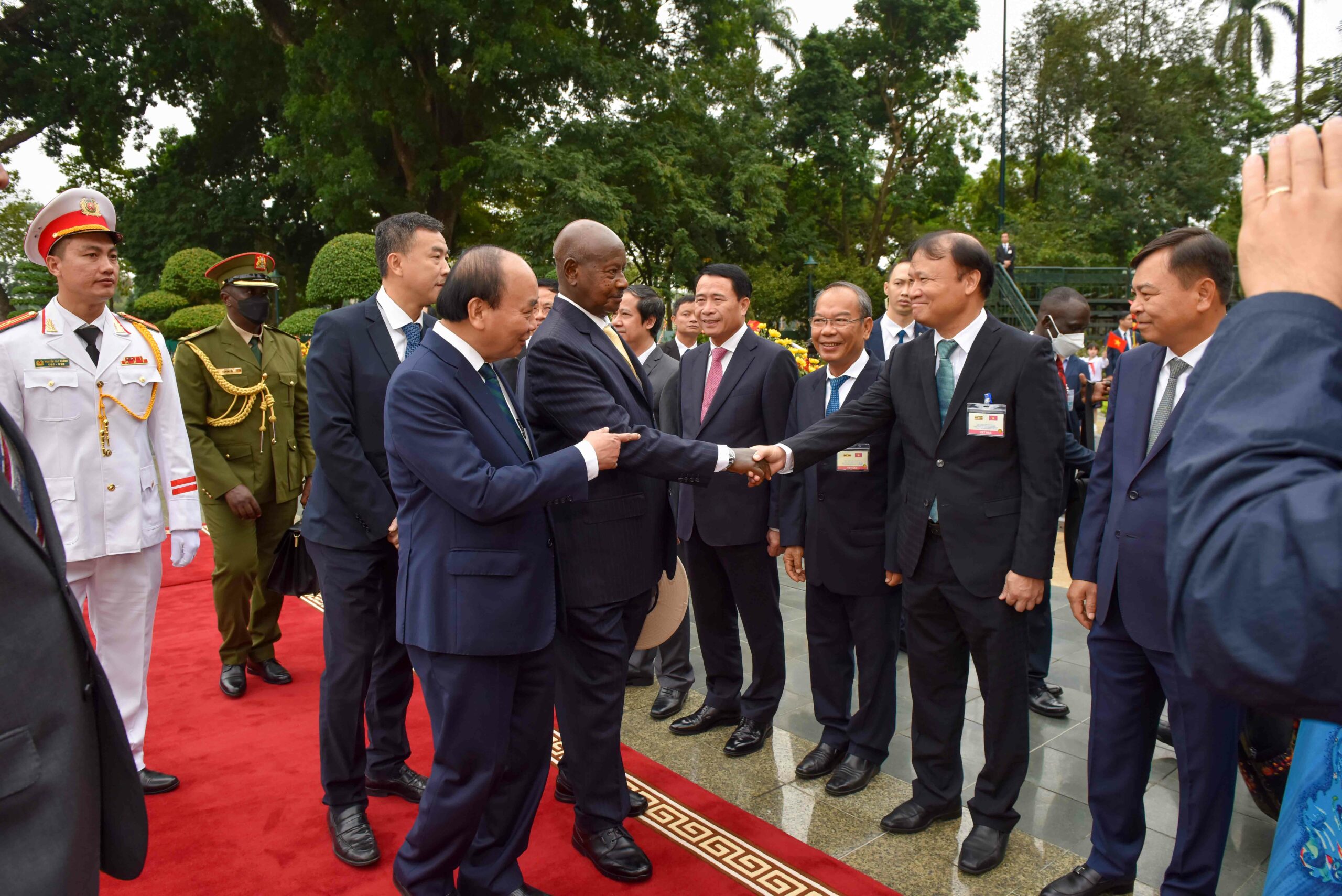 He also commended Uganda’s active contributions at regional and international forums especially the United Nations and the African Union. He further expressed gratitude on behalf of the people of Vietnam for the support from the government of Uganda towards their fight for national liberation.

“This is truly an important foundation for political trust and cooperation for shared development between the two countries,” H.E Nguyễn noted, adding that, “The traditional bond of friendship and cooperation between Vietnam and Uganda has witnessed very positive growth of late especially in the political, economic, trade and investment domains.” 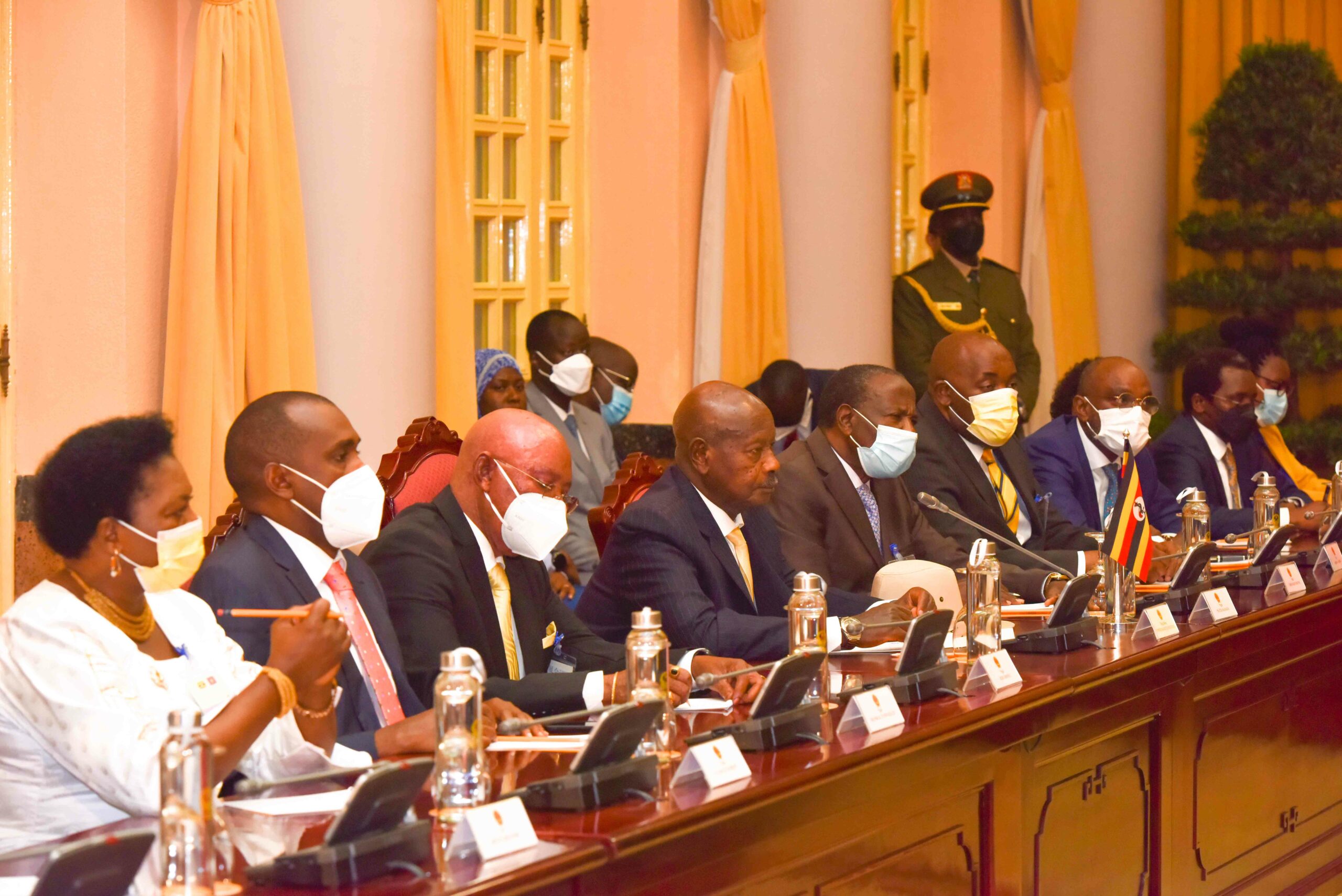 President Nguyễn informed the Ugandan delegation that Vietnam continues to spread its cooperation with African friends including Uganda in the lead up to the 50th anniversary of diplomatic relations between countries next year.

“Vietnam is maintaining its position among the top 20 largest trading economies of the world,” H.E Nguyễn noted.

President Yoweri Museveni on his part thanked his Vietnamese counterpart for the invitation, describing his visit as an opportunity for Pilgrimage to the heroic people of Vietnam.

“I’m very happy to be here and I thank you for inviting me. While the Muslims go to Mecca for Pilgrimage and the Catholics go to Rome for Pilgrimage to the Pope, we the freedom fighters come Vietnam as our Pilgrimage,” H.E Museveni said. 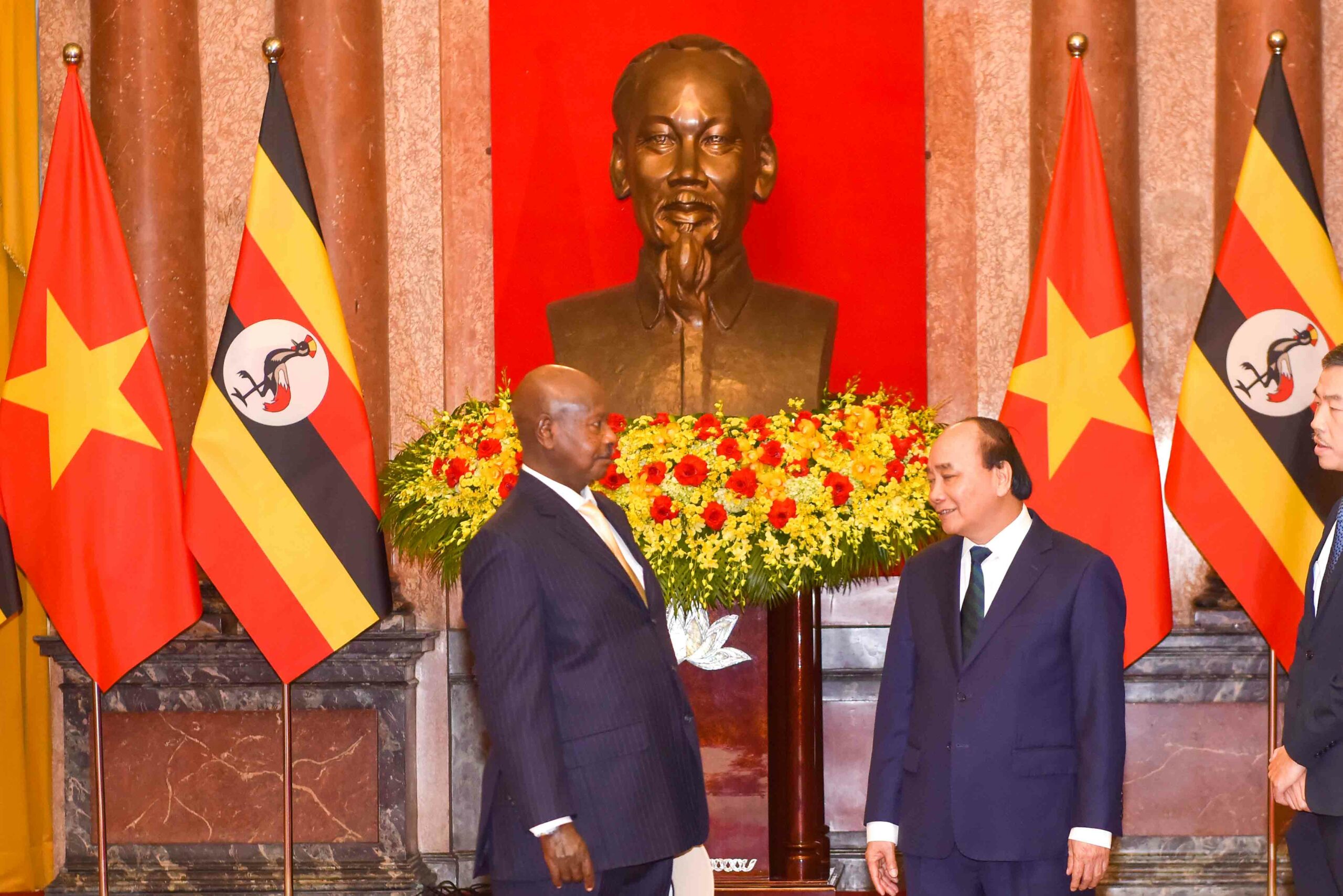 He congratulated the people of Vietnam for the struggle and successful reconstruction of their country, saying winning political victory is meaningless and can’t be sustained if they don’t achieve socio-economic growth.

Gen. Museveni also informed the audience that Uganda and Africa in general are moving forward despite the setbacks.

“It’s therefore very good that you’ve invited us here so that we can see how we work together in the four areas of technical scientific cooperation, agriculture, ICT and Health,” H.E Museveni noted, adding that he’s looking forward to sharing more on boosting trade in goods and services given the availability of market of not only in Uganda of 43 million people but also the East African market of 300 million and the African market of 1.3 billion people.

“So, whatever you produce in Uganda can be sold in all those countries. We have also got access to European markets and Asia,” President Museveni said before inviting H.E Nguyễn to Uganda. 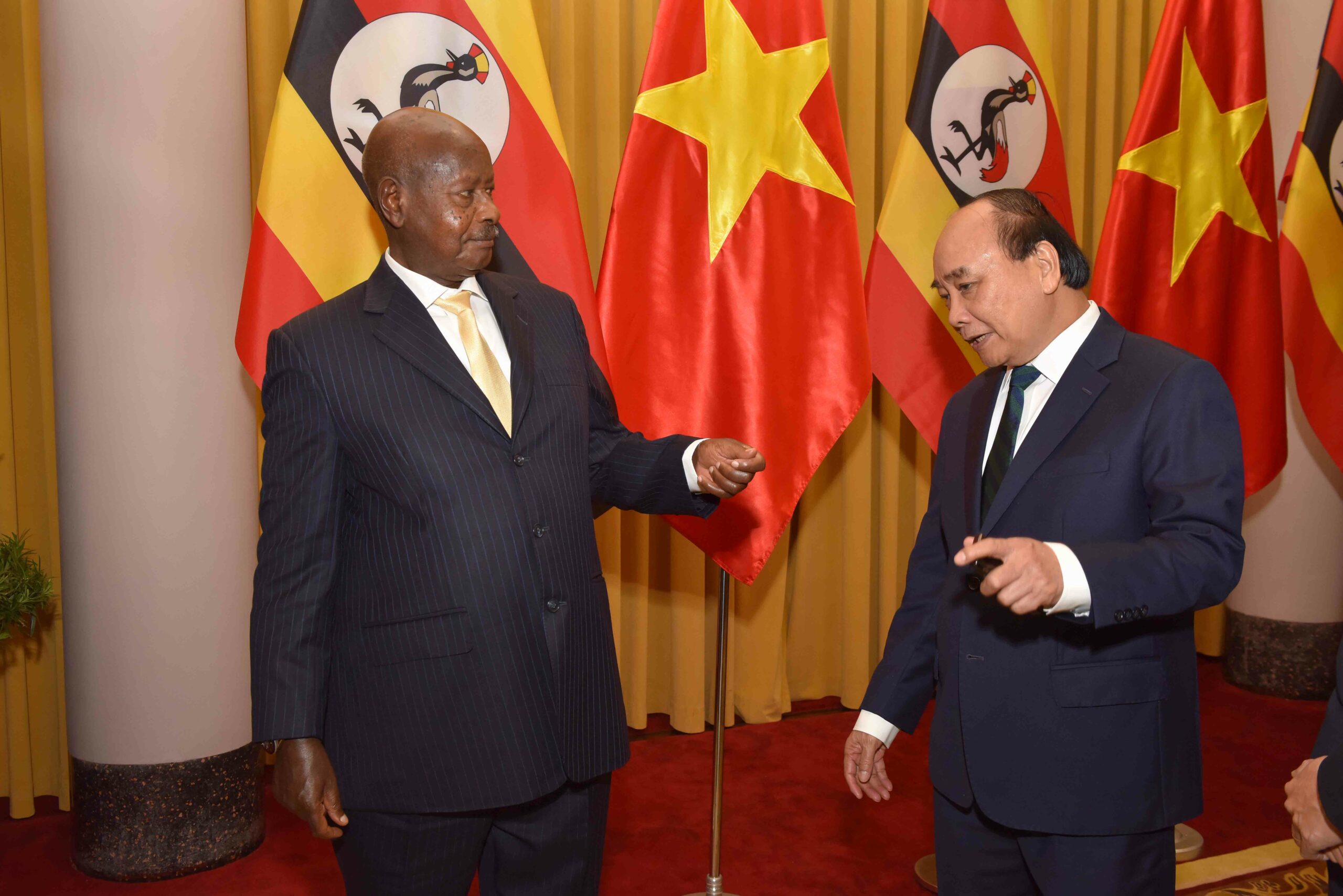 “I’m glad his Excellency Nguyễn is aware of the non-allied movement meeting in Uganda next year and would welcome his Excellency to come for that meeting,” H.E Museveni said.

The Non-Aligned Movement (NAM) is a forum of 120 countries that are not formally aligned with or against any major power bloc. After the United Nations, it is the largest grouping of states worldwide and Uganda was endorsed to chair the Non-Aligned Movement on behalf of Africa for the period from 2022 to 2025.

The Non-Aligned Movement conference will be held in Uganda next year in December.

Museveni was in the company of a section of his cabinet Ministers who witnessed the highest level of visit from the Republic of Uganda to Vietnam since the establishment of diplomatic relations in 1973.

The leaders later witnessed the signing ceremony of Memorandums of Understanding to further bolster the cooperation between the two countries.

Gen. Abubaker Jeje Odongo on behalf of the Ministry of Foreign Affairs of Uganda and his Vietnamese counterpart Bui Thanh Son signed an agreement on exemption for Visa requirements for holders of diplomatic and official passports. They also signed a Memorandum of Understanding on Cooperation between the two foreign ministries. 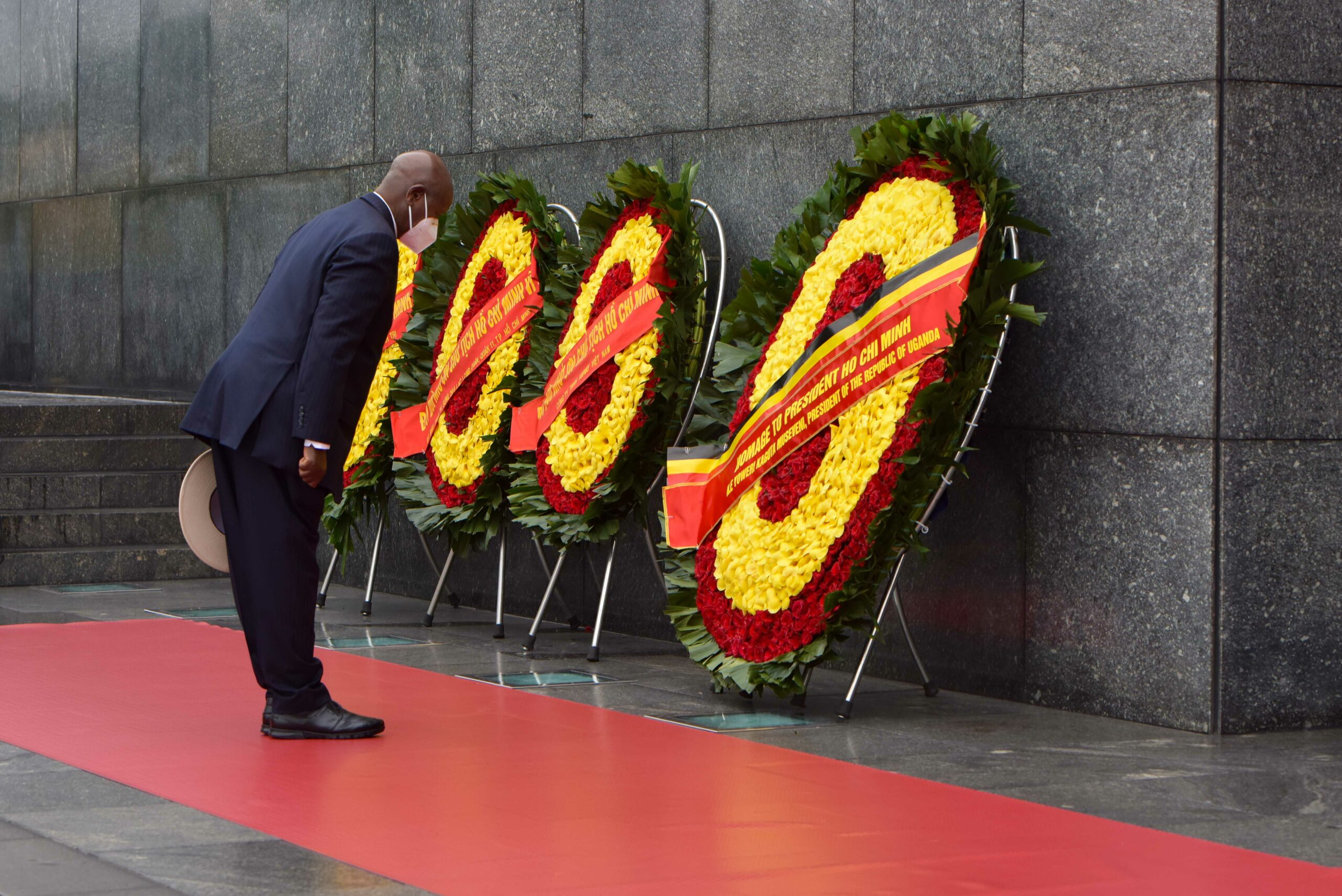 Hon Frank Tumwebaze on behalf of the Ministry of Agriculture, Animal Industries and Fisheries of Uganda and the Vietnam’s Academy of Agricultural Sciences represented by Mr. Nguyen Hoang Hiep signed a Memorandum of Understanding for scientific and technical cooperation.

Other Ugandan delegates present were; The Minister of Finance, Planning and Economic Development, Hon. Matia Kasaija, Hon. Ntabazi Harriet, the State Minister for Trade at the Ministry of Trade Industry and Cooperatives, Uganda’s Permanent Representative to the United Nations Adonia Ayebare and Betty Bigombe, the Ambassador (designate) to Asian Pacific Countries.

Earlier on, Gen Museveni paid tribute to the late Vietnamese Revolutionary leader and President Ho Chi Minh who died in 1969.

President Museveni laid a wreath at his mausoleum located in the center of Ba Dinh Square near the Presidential Palace which serves as the resting place of the former leader Ho Chi Minh whose embalmed body lies in state, protected by a Military Honour Guard watching over him.

Ba Dinh Square is where the late Ho Chi Minh read the Declaration of Independence on 2 September 1945, establishing the Democratic Republic of Vietnam.

The President had candid discussions with them at the Office of the Central Committee of the Communist Party of Vietnam and the office of the Prime Minister of Vietnam respectively.

On Friday, Gen Museveni is expected to visit FPT Corporation, Vietnam’s leading IT firm, and the Vietnam Academy of Agricultural Sciences, and officiate at the opening of the Vietnam-Uganda Business Forum and Trade Exhibition.

The visit, the first by a head of State between Vietnam and Uganda, is regarded as an important milestone in the bilateral ties. It takes place in the context of the two countries looking towards the 50th anniversary of their diplomatic ties (February 9, 1973).

President Museveni and a high-ranking delegation of the Republic of Uganda arrived in Hanoi, Vietnam on November 23 for a state visit at the invitation of President Nguyen Xuan Phuc.