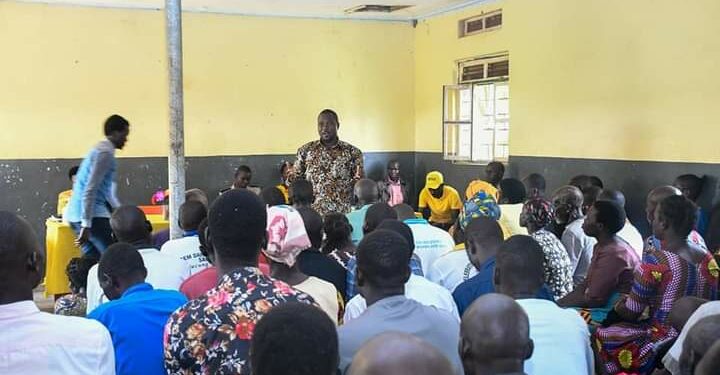 The Secretary-General of the National Resistance Movement (NRM), Rt.Hon.Richard Todwong on Saturday took time off the campaign trail in Omoro County to meet a section of religious leaders within the district to sensitise them about their responsibility to transform their believers.

Todwong who met the clergy in Omoro town council said the clergy have concentrated so much on delivering the gospel leaving the churchgoers poorer and vulnerable.

“Church leaders should start to pay keen interest and attention to the alternative ‘gospel’ of socio-economic transformation. You cannot be a church leader who superintends over members that are full time-poor. Getting people out subsistence way of living should never be left to political leaders,” Todwong said as he interacted with leaders from various denominations.

Although Todwong believes the government is liable responsible to improve the lives of citizens, he emphasized such is a noble role and therefore requires collective efforts from every leader and member of society to realise the dream.

“I want to mobilise you to be more mindful about the welfare of your followers. Teach them to fear God but also take some time during your church sermons to advise them to involve themselves in income-generating activities to transform their families and communities,” the NRM ideologue said.

Todwong urges that the cardinal role and justification of any leader irrespective of category in society is to ensure there is influence and positive change that is seen and felt among the people they lead.

After the meeting with religious leaders, Todwong joined fellow leaders at various rallies to campaign for their candidate Ojok Oulanyah where he appealed to everyone to use the time left to go collect their voter location slips and overwhelmingly turn up to vote next week on Thursday.

Todwong has together with directors from the NRM secretariat have for the last three weeks camped in Omoro district to campaign for the party flag carrier in a contest to fill the Omoro county seat but has also convened several meetings with various groups to teach them how they can utilize government programs already in place to get themselves out of poverty.

The campaigns have entered the last lap as all contestants remain with only three days to lure the locals to entrust them with their votes in a bid to represent them in parliament for the four years left.

Preparations in the NRM camp are underway as they expect President and their National Chairman, H.E Yoweri Museveni to be in Omoro County next week on Tuesday to comb support for Andrew Ojok Oulanyah.

Construction of Nebbi Bus Park stalls due to inadequate funds