by Watchdog Uganda
in National, News
55 1 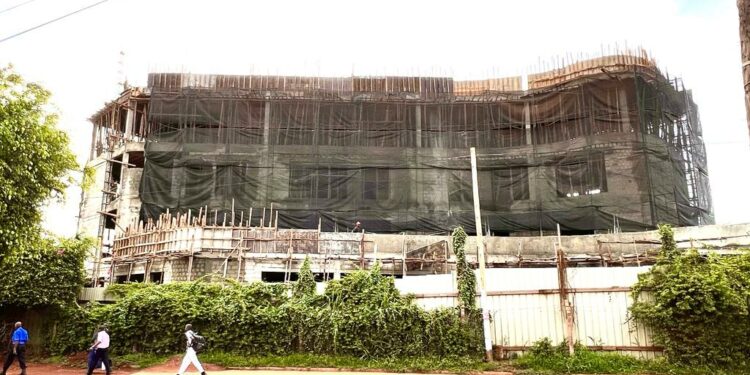 The under construction building on the land in question

The Leaders of the Nurses Union in Kampala a few years ago asked President Yoweri Kaguta Museveni for land at Mulago National Referral Hospital where they would set up a University to help members get specialized courses. The land would also host a canteen, hostel, and offices that would improve the welfare of nurses and midwives. However, the land in question has since changed hands for 49 years.

President Museveni while officiating at the International Nurses Day Celebrations at Kyamate Secondary School grounds in Ntungamo Municipality, directed the Ministry of Health to get them land where they can build.

Ministry of Health wrote to the Executive Director Dr. Baterana Byarugaba asking about the availability of the land. After some time without going through the laid procedures especially the top management of the hospital, he quickly allocated land up to 42 decimals next to Shell without involving the Top Management or Board of the hospital for approval.

On the same day, a third party paid shs665,500,000 million to Uganda Nurses Union and Midwives Union for leasing plot 2-10. On 23rd December 2019, Uganda Land Commission issued a lease to a third party to construct the building for occupation and use to the satisfaction of the lessor on or before the 1st day of January 2068.

On 7th January 2020, the Registrar of Titles issued a certificate of title in the name of Uganda Nurses and Mid Wives Union.

One of the nurses talked to our reporter asking the Union leadership led by Justus Kiplangat and Annet Birungi the treasurer to come clean on the third party who is building a commercial building on their land.

Nurses have promised to petition the President, IGG, and other agencies to find out who bought the land that was donated to Uganda Nurses and Midwives Union.

What was the role of Dr. Baterana Byarugaba in the sale of this land located on a plot between North Kitante Road, Mulago Shell Petrol Station, and Kiira Road?