We are ready to support you, NRM’s Seninde tells market vendors 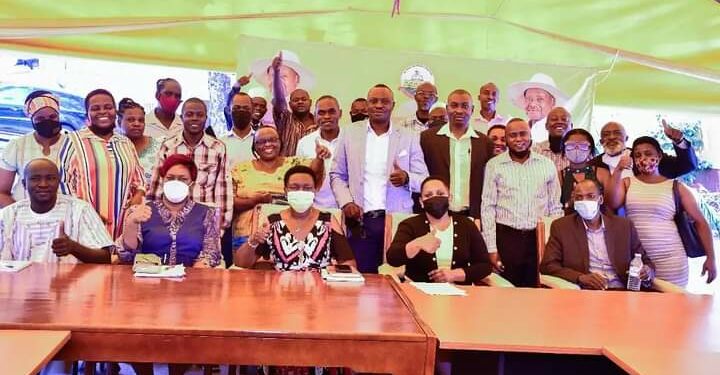 The NRM Director for Mobilization and Cadre Development Rosemary Nansubuga Seninde on Wednesday met with the new leadership of Kampala Market Vendors Association (KMVA) at the party headquarters in Kampala.

Speaking to the market leaders who were led by their Chairperson Mrs Kushaba Susan, Seninde said the NRM government is willing to assist them in dealing with their challenges.

“We as NRM party secretariat are not the ones that implement but our role is to monitor all that we promised our people in the manifesto,” she said.

” I assure you that we will take the responsibility of meeting the Minister for Kampala and the Executive Director of KCCA to give them this feedback that you have given me.”

The NRM deputy Secretary-General Rose Namayanja Nsereko applauded the leadership of markets vendors for raising their concerns and assured them that, through their chairperson, she will give them feedback in regards to their challenges.

“As the leadership of NRM we shall visit the NRM people in the different markets because it is another strategy for mobilization,” Namayanja said.

The group chairperson, Kushaba Susan asked the NRM party leaders to join them in developing markets and work to gain party support.

“Our objective is for NRM to have a strong support base in these markets. The reason why NRM has continued to lose in Kampala is that NRM leaders in markets have been neglected yet they have strong supporters of this mighty party,” Kushaba said.

“The Opposition has been using these markets as a platform to sabotage government programs and most of the NRM supporters have been left with no option other than supporting them.”

Kushaba however, requested the party leadership to organise a leadership retreat in Kyankwanzi to ensure they are ideologically oriented for the party to have committed and well-trained cadres on the ground.

The team also tasked the Seninde to identify strong NRM supporters in the Kampala markets through coordinating their leadership.

“Coordinate with us as leaders in markets to help you identify real NRM supporters”.

The leaders said because the Markets were constructed poorly, they lack customers. They also noted that most of these markets need to be renovated.

“Whereas the markets were constructed for the poor, the rich have taken them over. Government, therefore, needs to intervene.”

The group also asked the NRM leadership to visit the markets to be able to listen to vendors’ concerns.