Vulnerable children get second chance to study, excel in UCE

Wafafa scored 14 points while Kituyi scored 12 points. They were both students of Trinity Senior Academy at Bwebajja in Wakiso District. 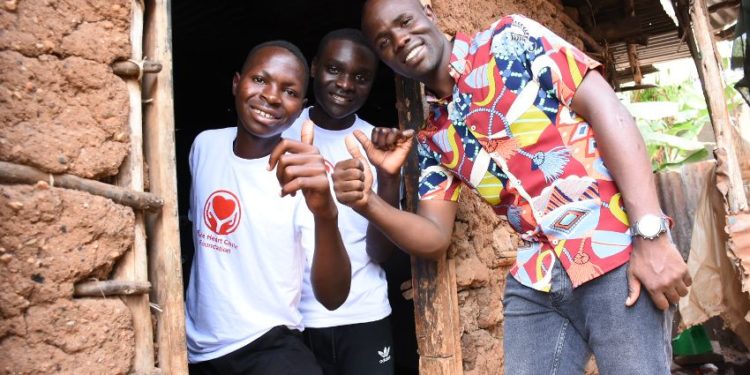 It was tears of joy as vulnerable children under the care of charity; Pure Hearts Organisation celebrated their success in last year’s Uganda Certificate of Education (UCE).

Wafafa scored 14 points while Kituyi scored 12 points. They were both students of Trinity Senior Academy at Bwebajja in Wakiso District.

Wafafa, the eighth child among 18 siblings scored aggregate 8 from Butsemayi Primary School, formerly in Manafwa had failed to join secondary school due to his parents’ inability to pay for his school fees.

“We were many in the family and my father, Anthony Wesswa is a primary teacher and in a UPE schools. He could not raise money for all of us. I studied in ten schools and I would leave each school with a debt until I completed primary school,” Wefafa narrates.

He reveals that after receiving his results in 2016, despite being one of the best pupils, Wefafa did not join secondary school until 2017 and he missed a term until a sympathiser connected him to Emma Wanyama, the director of Pure Hearts Organisation.

Wefafa said that the organisation has helped him to pay fees and facilitated his study leading to the best grades.

“I want to be an epidemiologist to help my country fight epidemics. Pure Hearts is my mirror to the society by identifying and helping us the poor children explore our potential,” he says

Wefafa narrates how Pure Hearts organisation has been kind, caring and groom him into a responsible young person encouraged to his best to serve the country.

Kituyi, 18, on the other hand says he scored aggregate 14 in 2014 after a long struggle for school fees; “I did casual labour to get school fees to complete primary school because my parents are unable to raise any money.”

“We are 14 children and getting school fees was a problem. After P.7, my hope to join secondary education was gone and I decided to work on someone’s farm raring animals until 2017 when I found a group of people who had got stuck on the road in our village and helped them. They asked me about myself and I told them I was not schooling, they picked me up and brought me to school,” he recalls.

Kituyi says that he is pursuing to become a medical doctor to help in building a healthy country and also improve people’s wellbeing.

Wefafa and Kituyi are part of the hundreds of children who secured a second chance to pursue their education career after they were identified and co-opted by a charitable body, Pure Hearts Organisation, based in Muyenga, Makindye Division in Kampala.

To Emma Wanyama, the founder and director of Pure Hearts Organisation, the success of the youngsters in the national examinations is the ultimate goal for the organisation.

Wanyama, a medical doctor explains that the organisation was started six years ago in response to then scaring statistics that revealed that over 50,000 hopeless children are living on streets.

“I was at some point a victim of same situations after having grown up with my grandmother who was very old. After scoring aggregate 5, I ended up on Mbale streets because I did not have school fees to continue with school,” he says.

He recalls that his sister picked him up from Mbale but dropped him Kampala where he lived on streets for one and half years until a wealth man picked him up and returned him to school.

“I felt rejection and I was desperate to do anything for survival. People on the streets have no choice and I had lost hope and the worst moment was during the outbreak of typhoid and I was only saved by a street preacher,” said Wanyama revealing that upon being helped to succeed, he started the charity to help youngsters explore their potential.

“It was sympathy that I am able to share and I am strong. I started this programme as a way of a bigger purpose to create change and shaping the country’s future by supporting young vulnerable scientists to obtain scholarships and study materials to reduce school dropouts,” he said.

URSB tips innovators on how to exploit their creativity