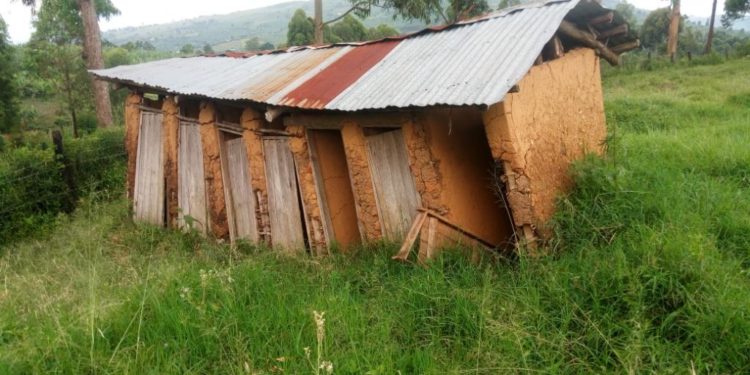 Kishonga Primary School in Buyanja Sub County in Rukungiri District is struggling to operate without pupils latrine. The only five stance semi-permanent latrine in the school collapsed in November last year.

Kishonga Primary School in Rubanga parish, which has a population of more than 200 pupils, is stuck with the problem of lack of toilet facilities after a three stance pit latrine was destroyed by heavy rains.

Currently, pupils have to use the school neighbors’ toilets whenever nature calls.

Emmanuel Mugarura, the Chairman School Management Committee, says the old latrine was built by parents and the one that is used by teachers was built by well-wishers of Uganda project 2 years back but the government has never built a toilet at the school.

According to Mugarura, the toilet collapsed because it was built using rudimentary materials which got rotten thus the collapse of the toilet. Mugarura now wants government to intervene immediately to save the situation.

Erick Marambuzi , the Head Teacher, says the situation is appalling adding that, the matter was brought to the attention of the district authorities to help the school get new pit latrines before schools opened for a new term but nothing has been done.

Marambuzi says that pupils and teachers are now inconvenienced in case anyone needs to use a toilet. He adds as result of the toilet shortage at school, pupils are forced to trek to the nearby trading centers to access latrines and at times they use staff toilets which very risky in terms of teachers privacy.

Agaba Emmy Rubondo, the Buyanja Sub County LC III Chairperson, says they notified the district on the situation at the school, but they haven’t received any response.

Jackson District Education Officer, says that his office is aware of the problem at the school. He says their hands are tied because the funds which can be used address such issues come from the Ministry of Education.