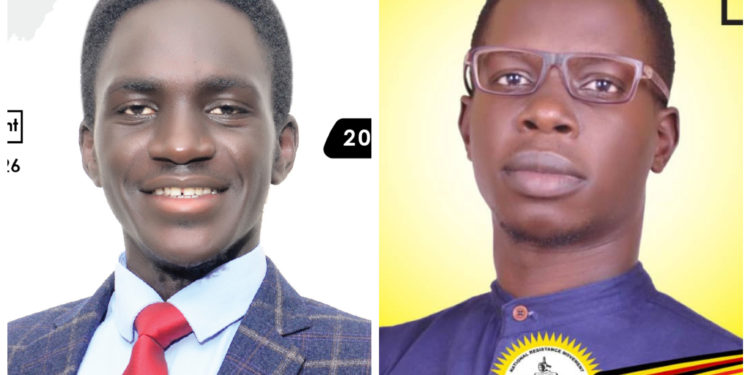 With just 28 days to the Youth Special Interest group elections, the race in Northern Uganda is like no other. With one candidate George Abudul still battling age related controversies, the tight race remains between NRM’s Boniface Okot and Independent Candidate Obal Daniel.

We understand that Mr. Obal earlier battled Ajuri county legislator  Denis Hamson Obua in the NRM Primary Elections but lost. The 23-year-old then opted to join the race for Youth MP Northern Uganda. This precisely means the race is more of an inter- party race since both candidates are of NRM origin.

However, following the nominations of candidates for special Groups on 22nd December 2020, Okot and Obal embarked on what is far from campaign, but show of money, power and influence. The two have been conducting campaign meetings for delegates from lango, with Okot fighting to reconcile himself with the langi after being accused of masterminding the denomination of Mr. George Abudul from the NRM Youth MP race.

The delegates have accused Okot of using his family influence and relations at the NRM Secretariat where he has been employed as a personal assistant to upset Abudul’s Candidature. For Obal, his battle has been to explain his manifesto to the young people of lango and Northern Uganda. For both candidates, it has taken the shape of proving abilities such as the ability to cough money, and cause things to get done.

In Lira, when candidate Okot met with youth leaders in Ogur Sub County Lira District, he is said to had given them 30,000 to cater for Lunch and transportation. In the following week, Mr. Obal is said to have summoned the same delegates to a top Lira Hotel, where he treated them to great lunch and drinks, and later tipped them with 40,000 in Transport in a bid to challenge his NRM Counterpart.

Further its said that on Christmas day, Mr. Okot Boniface sent Ugx 10,000 to at least 50 youth leaders with captioned messages and phone calls soliciting votes in his favour, and on New Year Day, he threw a party for youth leaders in Lira City. Mr. Obal on the other hand on New year opted to send cash to youth delegates in Acholi, Lango, Karamoja and West Nile accompanied by campaign messages asking for votes in his favour.

“From the information I have got from fellow delegates, Obal is sending UGX20,000 to district youth chairpersons on his side, others are receiving UGX 10,000 while others receiving UGX 5,000 for airtime,” said Komakech Vincent a youth delegate from Agago.

“I have not yet met him but have received his campaign messages and airtime. People are saying he is a good man and NRM. Though I am from Acholi, I would vote for Obal because he is under 25 years and represents the true young people” said Akello Immaculate a delegate from Gulu District while others say they would love to support Mr. Okot because he’s their Party official flag bearer.

While Obal’s camp moves to preach that Okot is an opportunist attempting to ride on his family influence to usurp leadership and dupe youth of Northern Uganda, Okot in rebuttal has been preaching his close proximity to the Rwakitura establishment and is rumored to have boasted at a point that the PPS to the President Dr. Kenneth Omona is his close friend whom he closely relates to.

Okot is said to be a nephew to Gen. Otema Awany And Mr. Todwong Richard the Deputy Secretary General of NRM. This would therefore mean the current youth MP Northern Uganda Hon. Oscar Otema Awany is a brother to Mr. Okot Boniface. Mr. Obal Daniel on the other hand is tagged to Ambassador Rebecca Otengo Amuge who is rumored to enjoy a befitting relationship with the Rwakitura base.

According to the Electoral commission, voter bribery and violence are grounds of nullification of a candidate.

According to whatsapp messages that has been making rounds in various senior NRM mobilization groups, the unknown author alleges that Mr. Okot’s candidature has been a planned family arrangement since 2013 when he contested for Guild Presidency at Makerere University but lost to Anna Adeke Ebaju the current National Youth MP and aspiring Woman MP Soroti District. The communication revealed that Mr. Todowng had given millions to Mr. Okot Boniface to fight for the seat, and that the duo used their powers to kick Mr. George Abudul out of the Youth Race.

The youth MP Race in Northern Uganda has been said to be rotational, in the most recent cases, from Hon. Hamson Obua of lango, it moved to Hon. Anite Evelyn of West Nile, then to Hon. Oscar Omony Otema of Acholi, and now may be taken in Lango, something that Okot’s candidature is perceived to be seeking to prevent. The