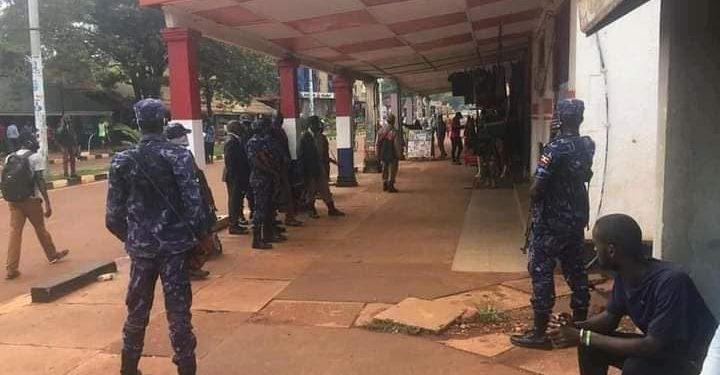 Police has made a raid on National Unity Platform (NUP) offices in Jinja.

Joel Ssenyonyi, the party spokesperson says the raid took place on Thursday morning and that the armed police officers have so far arrested one of their coordinators.

“We have learnt about the raid on NUP offices in Jinja by heavily armed police officers. They have arrested the office attendant plus one of our coordinators. And then you hear our leaders say that they returned democracy to the country. Just like their predecessors, they too will go,” Ssenyonyi posted on his social media pages on Thursday.

This is the second time, security operatives are making raids on NUP offices.

A few weeks ago, the army and police raided the Kamwokya-based NUP headquarters in joint operation which targeted civilians using military attires.

NUP officials said security took away Shs23 million in cash and 7,000,000 signatures the party had gathered to support the nomination of their Presidential flag bearer, Mr Kyagulanyi and other flag bearers.

But the search warrants signed by Assistant Superintendent of Police Jane Imalingat, ASP Bwonanebye, detective Constable Juliet Sajja and detective Assistant Inspector of Police Wamakale did not capture money and the missing signatures among the impounded exhibits. The warrants were signed by NUP officials who witnessed the search.

Enraged NUP leaders narrated how security broke into six different offices and took away sensitive documents and other things. They targeted the party president’s office, electoral commission committee office, office of the organising secretary, spokesperson, secretary general and the deputy as well as the treasurer.

“We have carried out this operation in different parts of the city. It just that some of these political parties had military attires in their offices and we had to enter and get them. This operation will still continue because this contravenes both the UPDF Act and the Penal Code Act,” Police Spokesperson Fred Enanga said after the raid.