by Mubiru Ivan
in News, Politics
29 0 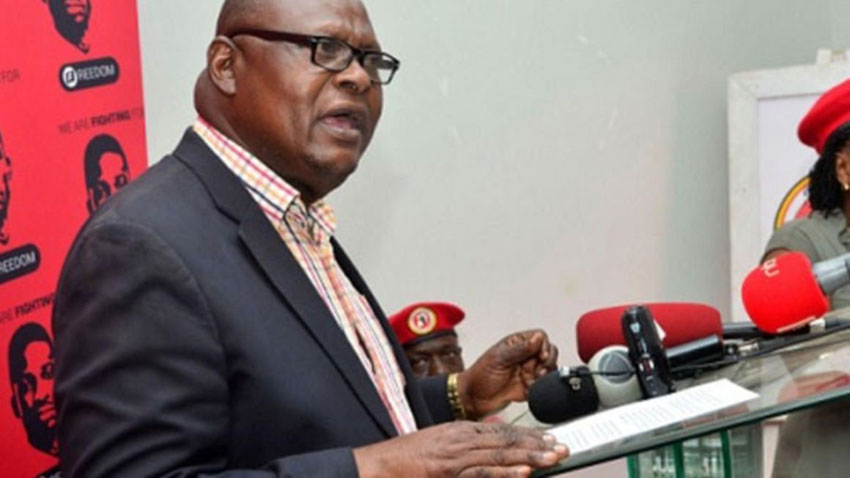 There is a big political storm since Moses Nkonge Kibalama, the man who handed over the presidency of National Unity Platform (NUP) to Robert Kyagulanyi alias Bobi Wine went missing.

Kibalama has been missing from his Buwambo home since Monday. It is alleged that security personnel wearing military uniform have been deployed at his house.

According to Daily Monitor, Kibalama’s private guard James Eyotu, said people in military uniform had barred him from accessing the second gate which leads to his boss’ house.

Fred Kizza, one of Kibalama’s sons told the local daily on Thursday that they were worried about their father’s life because his telephone numbers had been switched off since his disappearance on Monday.

“I tried to call the driver but the person who picked up the phone told me to assure our family that our father was safe and was with the security answering some questions. I haven’t heard from him up to now,” Mr Kizza said at their home in Buwambo.

She told Watchdog Uganda on telephone, “UPDF has nothing to do with Kibalama detention. It could be sister agencies.”

Information privy to Watchdog Uganda indicate that Kibalama is in hands of security agencies who are not under the command of UPDF.

However, information that we have collaborated, show Internal Security Organisation (ISO) who are providing security to him following intelligence reports of threats to his life.

The development comes hot on the heels of Kibalama’s change of goal posts to repossess NUP.

A few months ago the politician handed over the opposition political party to  Bobi Wine but on Thursday he made a u-turn to take back his party saying that the latter failed to stand by his word.

In a video that made rounds on social media yesterday, Kibalama is heard saying that the USD5 million (Shs18.5 billion) deal they had with Bobi Wine to make him the party president failed to materialise thus deciding to repossess what originally belonged to him.

However, in a statement issued on Thursday, Bobi Wine said the move is an attempt by Museveni’s regime to derail their progress in the struggle for freedom and democracy.

“Countrymen and women, this confirms one thing. General Museveni is so scared of us. He has tried countless things to stop us and he is still trying. BUT WE, THE PEOPLE WILL PREVAIL AGAINST HIM. Secondly, indications are that Kibalama, whose house is now guarded by UPDF has been compromised and coerced into disowning us and claiming that whatever was done to change leadership was illegal, “the Kyadondo East Member of Parliament asserted.

On the issue of failing to pay Shs18.5 million for Kibalama’s party, Bobi Wine said the allegation should be treated with the contempt it deserves.

“In a very shameful way, Mr. Kibalama states that we promised to pay him five million US dollars ($5m) for transferring the party leadership. Treat this with the contempt it deserves. We are aware that for a very long time, the regime in Uganda has tried to portray us as people who get lots of money from foreigners!”

Why Kyadondo East by-election is a do or die for Dr Kizza Besigye, not Kantinti