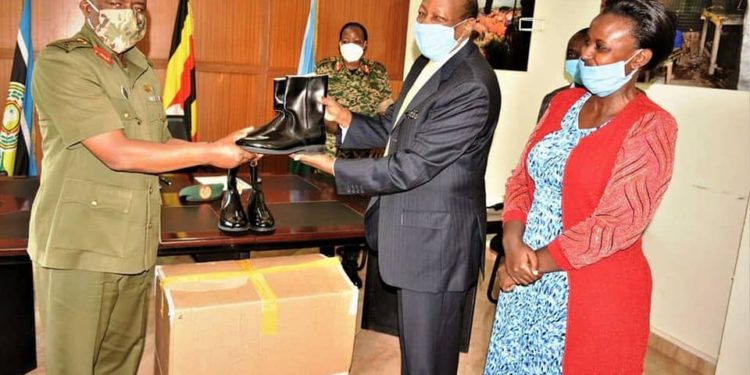 Uganda Peoples’ Defence Forces [UPDF] has today received a donation of 100 pairs of water proof welling boots for UPDF General officers from RockShield Limited at the MODVA/UPDF headquarters in Mbuya.

The donation was delivered by the Managing Director of Crown RockShield Limited, Mr George Rogers and received by the UPDF Joint Chief of Staff Lt Gen Joseph Musanyufu.

Lt Gen Joseph Musanyufu in his remarks thanked the company for the donations during the current difficult times when security Forces are playing a vital role to ensure safety of the people in the COVID19 war.

Let Gen Musanyufu added that this is not the first time the Company is donating to UPDF, “Crown RockShield Limited has partnered with UPDF since 1986 after His Excellence the President of the Republic of Uganda took over power, you played a major role in developing UPDF uniforms” He said. Musanyufu pledged that UPDF fraternity will continue working closely with Crownfield for the noble cause.

Mr George Rogers said the donation is in appreciation to the UPDF for its contribution in ensuring peace and security in the country that enables trade to thrive and to the people of Uganda for their support for the company.
“Our relationship with UPDF cannot be under estimated because it was built on the foundation of trust, reliability and professionalism” he added.

Furthermore,he said many companies and individuals have contributed their resources to the government towards the pandemic effort, but Crown Rockshield Limited decided to concentrate their effort on the UPDF fraternity. He confirmed that the Company has stocks which meets the standards of UPDF dress code.

LIST: 14 Museveni Ministers who have been defeated heavily in the NRM primaries