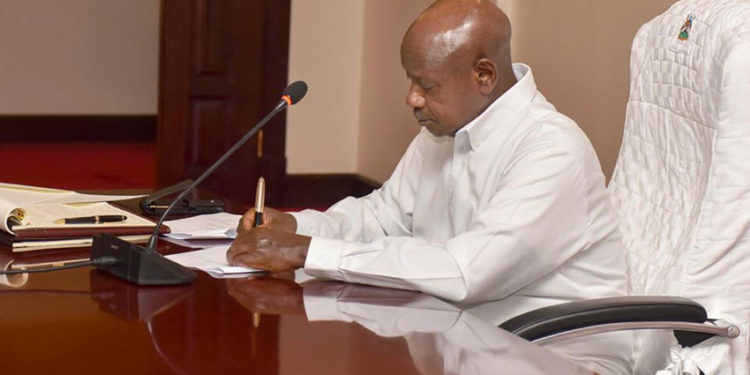 President Yoweri Museveni has castigated people who have made it a tendency to promote tribalism and sectarianism in Uganda.

In his strong worded missive posted on his social media platforms on Thursday, President Museveni said that of recent there’s a wrong malignment trying to portray NRM as a system monopolized by people from western Uganda, which he says its not true.

“…..Since you are allergic to history, otherwise, I would have reminded you that much of my time I was in Tanzania, Mozambique etc. How many Banyankore or Westerners were there? We fought in the Luwero Triangle. Many Ugandan groups were there: Baganda, Banyankore, Barugwaara, Baruuru, Barundi, Banyarwanda, Baruuli, Banyoro,” Museveni said.

Adding, “There was an unclear picture trying to show some army people. Kindly, leave our Armed Forces out of the nonsense of tribal debates. They have serious work to do and they have done it well. Leave them out of your confusion. The only point one can say about that is recruitment in the Armed Forces is by quotas per district. You check during the recruitment time.”

Museveni further revealed that he is quite comfortable without many Banyankore around him before wondering how people accusing his government of tribalism arrive to their conclusion.

He cited an example of the civilian officers working in the office of the presidency, saying all of them are from other regions, not western Uganda.

“However, you can look at your fellow civilian officers. Here in the Presidency, I am quite comfortable without many Banyankore, or, indeed, any munyankore around. Mitala- Unless he became a munyankore today – Head of Civil Service, Katuramu- Westerner- Kabalega’s land;President’s Office – Kakande- only munyankore through enkaanda, otherwise muganda from Ddwaniro- Masuliita, State House Comptroller- Nakyobe – only guilty on the
nkaanda side, muganda of some place, PPS to the President- Omona – Originally Acholi, but somehow Kumamunized by residence.

“I am quite comfortable without any big munyankore in the vicinity. Do not tell us about those cheap things of tribes and  religious sectarianism” Museveni asserted.