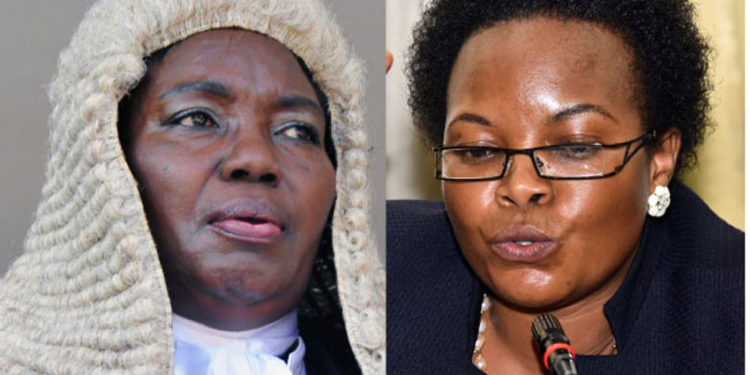 The moment Persis Namuganza, a junior Minister for Lands also Member of Parliament for Bukono Constituency in Namutamba district decided to take on Speaker Rebecca Kadaga in the “war of the Supremes of Busoga,” many political analysts quickly projected doom for the princess of Busoga kingdom.

As a political Constituency, Bukono was curved off Busiki after Namutamba had attained a district status in 2005.

Namuganza is a princess in Bukono Chiefdom – one of the principalities that make up Busoga Kingdom. She is a daughter to the late Nkono Christopher Mutyaba, who also once served as acting Kyabazinga after the death of King Henry Wako Mulooki in 2008.

According to Namuganza, her late father chief Mutyaba was actually a good friend to Kadaga and he even introduced his daughter to the mighty Woman from Kamuli upon her appointment as a deputy RDC for Kayunga for mentorship and protection.

The two however failed to get along after disagreeing over the Kyabazingaship, with Kadaga mooting for Prince Gabula Nadiope while Namuganza wished for a prince Columbus Wambuzi of Bulamogi.

The feud between the two Museveni allies became public in 2018 when Kadaga flew in a chopper to take part in the enthronement ceremony of a new chief for Bukono, something that Namuganza castigated as interfering in the affairs of Bukono.

She also accused her of installing an illegitimate chief along with Ministers who hail outside the Chiefdom.
” I was just wondering how a sheikh could come to preside over a function of Bishops? ” She told the disciplinary committee of Parliament.

The contest between two of the most influential women in the region spurred a lot of controversy with a group of over 10000 King’s loyalists led by Kyabazingaship Minister Joan Machora matching to Busoga square in protest after Namuganza allegedly asked the people of Bukono to pelt stones at Kyabazinga Nadiope should he dare set foot there. They demanded that she apologizes which she refused.

Even though the contest seems to have ended, it’s not to those who claim to know well the politics of the region.

According to Mr Paul Kawanguzi, a seasoned politician in Busoga, Kadaga doesn’t easily go down like that. To him, there is a lot still to be done by the powerful Museveni Minister before she can finally celebrate her victory against the “King maker” of the land.

He however contends that Namuganza has a chance to establish herself as the center of power in Busoga should she manage to defeat a possible Kadaga- barked opposition to his 2021 re – election bid although he also expects Kadaga to use all means at her disposal to make sure that Namuganza loses.

Deeply analysed, Kawanguzi’s observation makes some sense. Kadaga will be racing against age as she rides into her 70s while Namuganza is in her 30s with her best a head of her. If she wins, the region will gift her for having managed to stand tall against the indomitable Speaker who not many have dared and survived in the past.

The recent developments have also depicted that President Museveni must be feeling intimidated by Kadaga’s ever growing influence. As such, identifying a formidable challenger for her must be high on the agenda and victory for the fearless princess would be a relief for him. As such, she could emerge as a very powerful member of the President’s next cabinet.

Namuganza will however face an uphill task to reclaim Bukono besides just Kadaga’s rivalry.

Her fiercest rival and former District Chairperson Micheal Saire is not a simple opponent. In fact he was able to defeat him in the NRM primaries in 2015 before she beat him in the final polls as an independent candidate.

The Kadaga backed Saire has had enough time to build on his 2016 popularity while Namuganza has been kept busy with both the legislative and Ministerial responsibilities.

In addition, the emergency of the Coronavirus pandemic ate up the time when she would have used to meet with the voters to make up for the long time absence due to her busy schedule in kampala. All this served to the advantage of Me Saire – her closest challenger.

As we have learnt earlier, Namuganza’s relationship with Busoga Kingdom is not at its best at all. Having refused to make peace with the Kingship after calling for a mob attack on the King, Gabula loyalists will certainly be having scores to settle with her come 2021.

Unlike in Bulamogi Chiefdom, Gabula is believed to enjoy considerable popularity in Busoga and this is likely to gravely affect Princess Namuganza in next year’s polls.

It’s however also believed that the Minister has since been able to rally her people behind their Chiefdom for which she is viewed as the protector. If she manages to have them speak as one voice come 2021, she could find her journey back to Parliament simpler than what many are projecting. This is however only if she can endeavor to mend the rifts within the royal family of the Chiefdom which she has herself said exists.

Another challenge that will most likely face Namuganza’s re election bid is opposition from Kadaga’s Igaga clan which is powerful and equally dominant in her Constituency. Eventhough Namuganza and her followers accused Kadaga of getting into the affairs of Bukono when she is from Bukono, it was reported that the members of the royal family had invited her as a senior citizen with roots in the same area. Namuganza’s outbursts against their guest – Kadaga therefore seems to have angered many, some of whom might not yet feel ready to forgive her come 2021.

Despite all the above challenges however, Namuganza has been one of the most active and effective Ministers in Museveni’s cabinet. Besides the people of Bukono, President Museveni wouldn’t wish to lose her political energy especially at a time when he is surrounded by many aged people. Besides, his desire to keep Kadaga’s power under check might tempt him to assist so she makes it back next year.

Kampala Deputy Mayors and their vulnerability to Museveni's trickery: Will Nyanjura stick with Lukwago?