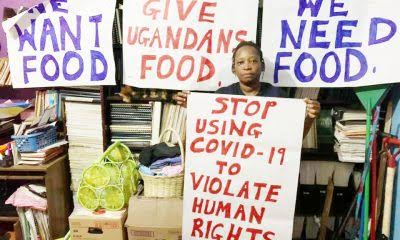 As dissatisfaction grows among the public over the painful pinches into their pockets following the ongoing two months lockdown, former Makerere researcher Dr Stella Nalongo Nyanzi and events promoter Andrew Mukasa of Bajjo events stormed the streets of the Capital Kampala leading hundreds of other City dwellers in protest against government’s sluggish distribution of relief food items to the starving population.

It took a heavy police deployment to finally quell a few hungry – angry demonstrators amid laments of “we want food”. Nyanzi’s resolve would evidently be seen on her face as she faulted her accusers for being indifferent in face of public suffering.

It wasn’t until several dozens of able bodied and well fed police officers combined effort to bundle her onto the waiting dreaded police cage van that she yielded.

Where as Nyanzi and Bajjo’s group might be underestimated due to their relatively small number, it is absolutely right to say it’s a true representation of the rage among the population who have been caged at home for two full months over Coronavirus.

Checking through post comments by Ugandans on the different social media platforms each time government issues an update on the new reported positive cases of COVID19, one wouldn’t fail to establish how desperately hurt people are.

Many have have vehemently protested government’s continued reluctance on curtailing foreign infections as truck drivers roam uninterrupted while the population endure under forced home confinement.

With families kept at home with no sources of income ever since businesses were closed down, the Nyanzi style protests would be expected and a lot more uglier than what was seen on Monday.

The promise of relief food distribution was greatly welcomed and appreciated by both actual and intended recipients. Many have had to live expecting the arrival of the said food rations as their only hope for life. And when it hasn’t arrived despite waiting in despair, another person is bound to be born within the people – that fearless violent and insensitive inside man!

With the President expected to address the nation later today on the way forward after the recent 14 days lockdown extension comes to an end, his subjects will be watching with hearts racing up and down expecting a release from domestic bondage so as to be able to resume their work.

The public has come to conclude that the current crisis in evidently no longer about them but rather about the infectious truck drivers who they think should be strictly censured and that the lockdown is no longer a necessary measure.

Public outcry by the people calling for the lifting of the lockdown will however offer a paradoxical challenge to President Museveni who has over the last two months demonstrated that he is willing to risk losing anything for the sake of ensuring the safety of his people against Coronavirus.

Unless checked with utmost empathy and wisdom, the rage among the population could ferment and explode into something more sinister that today’s Nyanzi led street protests involving a handful of angry Kampala residents.

It’s therefore important that those concerned respond with effective measures before people come on the streets to demand much more than just food but other things on top.

Raped for speaking out against rape