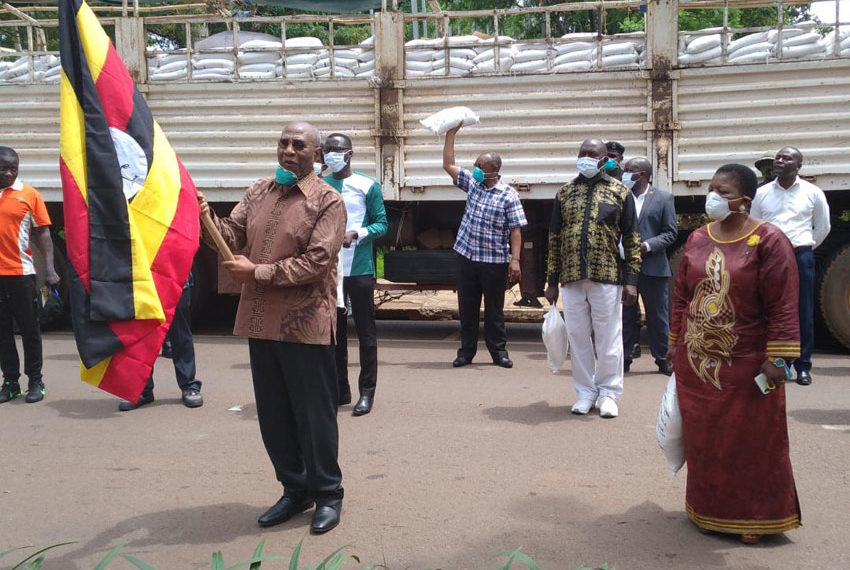 The government of Uganda over the weekend resolved to terminate it’s food relief supply contract with businessman Apollo Nyegamahe popularly known as Aponye after it was established that the prices in the contract executed with the Office of the Prime Minister’s officials was way too high, leaving him with no option but adjust below the maximum set by cabinet.

The business had been given a Shs52 billion contract to supply posho and beans to feed 520 villages within Kampala and neighboring areas but failed to deliver hence resorting to seeking the help of subcontractors who also managed to deliver just about 30 per cent of the anticipated capacity.

As if the was not enough, it was later on established that the incapable suppliers had quoted an exorbitant price with the help of the the OPM officials who have since been arrested on graft charges to the annoyance of President Yoweri Museveni who ordered an instant investigation into the matter.

In a crisis meeting convened to discuss the matter at the office of the prime Minister on Saturday evening, a resolution that the prices be revised and space be opened for other suppliers with capacity be opened was reached which forced Aponye to grudgingly accept to forfeit the old lucrative overpriced contract and fall suit with other suppliers identified through the Uganda Council of Grain Millers and Operation Wealth Creation.

The development comes as relief to under pressure Prime Minister Ruhakana Rugunda whose target deadline of at least finishing the supply of the relief food to the 520 villages in Kampala by the first week of the lockdown has already elapsed, amid mounting pressure from the appointing authority over failure to deliver on time.

Ruhunda is said to have pleaded with Museveni to be granted more time to have the food items delivered to the country’s urban poor amidst protests from the Commander in Chief who feels that failure to deliver the promised relief items would injure his popularity among the already dissatisfied urban population.

Museveni’s lock down under which he intended to bail out his urban subjects runs out on Wednesday 14th this week and should the OPM fail to deliver, his plans for the grieving poor urban dwellers will definitely have been defeated.

By the end of the first week of the lockdown on Thursday, the Rugunda relief supply teams had so far reached out to just 12000 households in Kampala, a figure that falls way below the anticipated numbers.