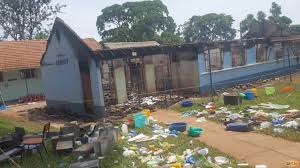 Gayaza high school has appealed for calm among parents and learners following a second fire outbreak in a space of two days.

The first fire outbreak on Friday night burnt Corby dormitory and destroyed all the students’ property to ashes, while the second fire burnt Kivebulaya dormitory on Sunday afternoon.

As news of the second fire outbreak spread, parents stormed the school asking to take their children away until the police finalizes its investigations into the cause of the fires. However, the school administration denied them access.

“What if another incident happens and we lose our children? When the first fire broke out, we were told to stay calm and that is what we did. But just after a few days, we are now hearing that it could have been planned,” parents lamented while shouting at the security guards who had been deployed at the gate to block their access.

One parent who identified herself as Polly says that she was able to speak to her daughter who seemed scared and couldn’t stop crying, all through the conversation. She advised the school to accept that there is a problem and send the children home for a while as investigations go on. She says the children are too traumatized to learn.

“Today I got a phone call, I couldn’t conclude the conversation with my daughter, she was in tears. I had to run, it is the reason why am here. They are all crying, they are very desperate and they end up locking us all these hours, I might go back without seeing her. It is also traumatizing on my side. You see all the police trucks? The girls have been crying, some of them have fainted and we’re here desperate parents. Of course, it is not nice.” she added.Another guardian who preferred anonymity says that he contacted the school administrators after receiving information but they indicated that there was no second fire at the school.
“I have a sister here, S.4 and she’s right here and can’t even talk well. This is not the only school in Uganda, they are not handling this situation well. Parents want to see their kids, that is simple. But they are saying there are meetings being held, there is things of back and forth. We’re here…They are claiming there was no second fire, yet there was a fire,” he said.Robinah Kizito Katongole, the school headteacher told journalists that the second fire incident was blown out of proportion.
“It was a minor incident and it has been handled. We later called in police who have also shown up but everything is fine,” said Katongole.She added that the school wasn’t breaking off since the matter has since been handled by security at the school being beefed up. She accepted that the two incidents could have affected the students and the school is soon going to offer psychosocial support to the students and staff.

Edison Muhangi, the Kasangati divisional police commander says that they have agreed not to allow anyone inside for the purpose of ensuring children’s safety. URN has also learned that Kasangati police division has asked for reinforcement of more female police officers who are going to be deployed in and out of the school.

Muhangi says that all the children are safe since there were injuries recorded in both indecencies. However, Muhangi refutes notes preliminary investigations are pointing to possible arson.

Meanwhile, as investigations into the matter first on, police in Kasangati have been reinforced with more female police officers who are going to oversee the internal security at the country’s oldest all-girls boarding school.