What has perplexed many social media followers is the signature below ‘Bobi Wine’ which all seem different.

by Elisha Z. Bwanika
in Entertainment, National, News
6 0
Share on FacebookShare on TwitterShare on Email

Musician turned Member of Parliament Bobi Wine woke up on Boxing Day to the news that he would not hold his annual Yee Seboo show at Busabala.

Police deployed heavily on the premises, even firing teargas to disperse fans who had come to make merry.

According to Police spokesperson Emilian Kayima, Bobi Wine also the Kyadondo East legislator did not write to police seeking permission and security for his concert.

“As far as I’m aware, I don’t think the concert will happen unless it was cleared. If Bobi Wine hasn’t written to Police about his concert, that’s not my issue because if he writes, we shall police his concert,” Kayima said before blocking Bobi Wine’s show.

Bobi Wine however took to facebook to maintain that he had written to the force prior. To back his claims, the ‘Kyarenga’ musician splashed several letters written to the police requesting for security and clearance to hold the show.

The said letters which appear under a ‘FireBase Entertainment’ letterhead were written between December 21 and December 23. They were addressed to ‘Directorate, Fire Brigade’, the ‘Inspector General of Police.’

What has perplexed many social media followers is the signature below ‘Bobi Wine’ which all seem different.

One hawk-eyed social media user called Wadada Michael spotted the anomaly, writing “Three letters – each with a different signature all signed as Bobi Wine. I need some legal guidance here.”

You ca be the judge. 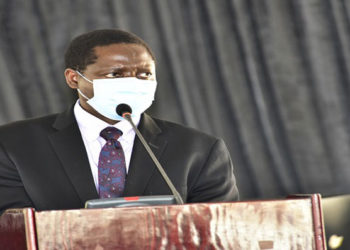 A $235.4 million loan, which translates to about Shs868b has been approved by Parliament for the construction of a host...