Orombi said that men who don't give enough time to be with their wives and speak to them, risk losing them.

by watchdog
in Showbiz
6 1 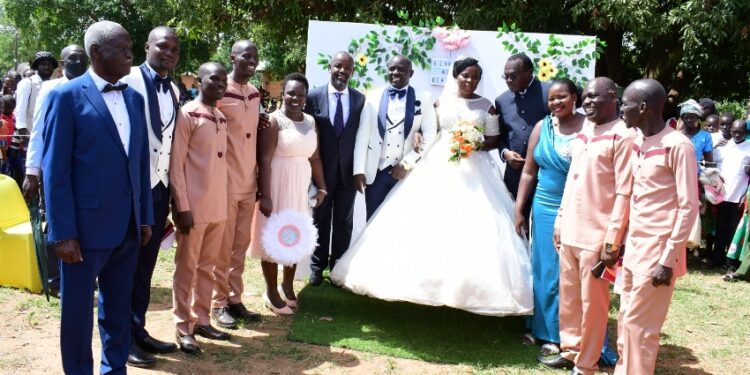 The Deputy Speaker Thomas Tayebwa has assured spouses of legislators that they are part of Parliament and they need to work closes with the institution.

Tayebwa who is also the Ruhindo North MP was on Saturday speaking at the wedding ceremony of Kenneth Orik and Beatrice Akori the Agago District Woman MP.

The wedding ceremony was held at Lira Palwo Christ Church in Agago District.

“So Kenneth our brother we welcome you. You are now an associate Member of Parliament. You have joined the club of (Lt) Gen Otema” he said.

Lt Gen Charles Awany Otema is the husband to Lamwo District Woman MP Catherine Lamwaka and the Deputy Speaker praised him for standing out with her during trying moments of elections.

“I want you to be what Gen Otema is to the Honorable Catherine Lamwaka. Since Beatrice has married you, she is now very sure that she will always win” he added.

Tayebwa who delivered a congratulatory message from Speaker Anita Among to the newly wed couple, emphasized the need for legislator’s spouses to associate with Parliament.

While arguing Okir to shower Akori with love in order to be loved by the institution of Parliament where she works, Tayebwa said that; “women in Parliament have a club and soon we shall introduce you to the men’s club”

Orombi said that men who don’t give enough time to be with their wives and speak to them, risk losing them.

“You need to give qualify time to your spouse. She wants to be with you. She wants to listen to you and she wants to see you. But if you are a man who comes through a front door and out through the kitchen door, you will lose your wife and children” Orombi said.

Orombi who revealed he is set for a golden jubilee with mama Phoebe Orombi next month, argued Orik and Akori to show the same kind of commitment to each other so that their visitors can return for a silver jubilee and other anniversaries