by Mubiru Ivan
in Entertainment, Showbiz
12 0 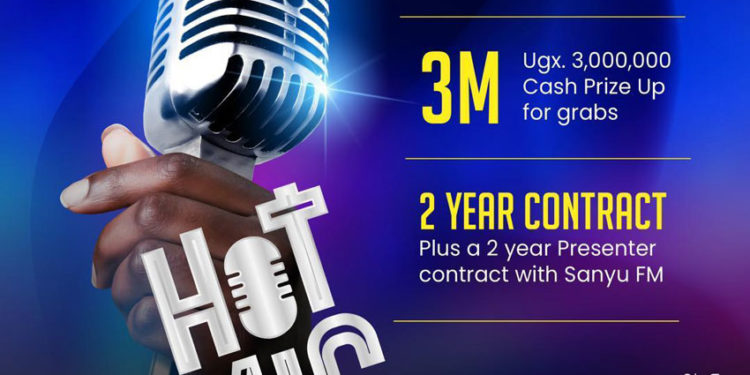 Sanyu FM has availed a chance to its listeners to become superstars.

The station has launched a radio talent search dubbed ‘Hot mic search’ that shall see a winner going home with a cash prize Shs3 million as well as a presenter job with a two year contract offer.

“Rise out of Covid a Star! Hot Mic Search on 88.2 Sanyu FM.. What’s App your Video to 0752711611 saying why you should be the next big thing on Radio. T&Cs apply. This is the opportunity that was waiting for YOU!” a message from the station reads.

For the past few weeks, the station’s management has been working around the clock to rebrand the station by recruiting stars like Rogers Mugisha, Patrick Salvado among others following the sacking of the old staff over a sit down strike.

Early this month, the Sanyu FM owner Dr Sudhir Ruparelia said that he wanted “new blood” at the statio after the entire staff went against their contracts which bar them from striking, and went ahead to lay down their tools. They were protesting against the station’s move to have their salaries cut by 25 per cent in the wake of coronavirus pandemic that has crippled most business enterprises around the world.

The entire staff didn’t stop at refusing the percentage cut offer, instead, they even decided to lay down their tools for days thus forcing the station management to send them packing.

However, later the businessman changed his mind and agreed to pardon the sacked staff who allegedly ‘apologised’ to management.

A source who attended the meeting but preferred anonymity said that the staff begged management to return to work because they were misled by one of their colleagues.

The source said that the top managers during the meeting agreed that all those who had absconded but wanted to return must re-apply for their jobs.

Management also reportedly received a list of some people who have been recommended to take over the jobs of all those who have left.