Some girls can be lucky. Then there are those who can be pretty and lucky. That is how many other unlucky girls will probably view former Miss Uganda, Stella Nantubwe alias Ella right now.

See, the struggling actress celebrated her 28th birthday at the weekend in a lavish ceremony many thought could have passed for a wedding reception.

This glamorous event at Kampala Serena Hotel was attended by friends and family with entertainment provided by artistes such as Geo Steady and Cindy. The sponsor of the party is still a mystery although some sources suggest it is some Nigerian living in Uganda.

Each guest was apparently given a present.

To cap off the evening however, the former Miss Uganda contestant was gifted a brand new Lexus UBE Series worth Shs200 million.

She was seen smiling from ear to ear in a video posted on social media by one of the invited guests.

Ever since she won the 2014 Miss Uganda crown, Ella’s social life has been sky rocketing. In 2014, she represented Uganda in Big Brother African were she finished ninth. Currentlyshe features in the NTV-produced TV series ‘Second Chance’.

Now that is what they call lucky. And beautiful. 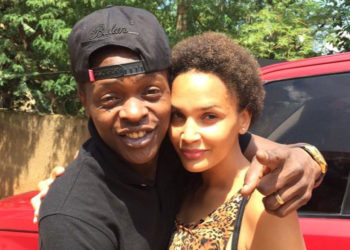 Gashumba-Murundi team up for online’s ‘baddest’ video show ever