JUMA KIGONGO: The War on Terrorism is a Crisis That Calls For Participation For All 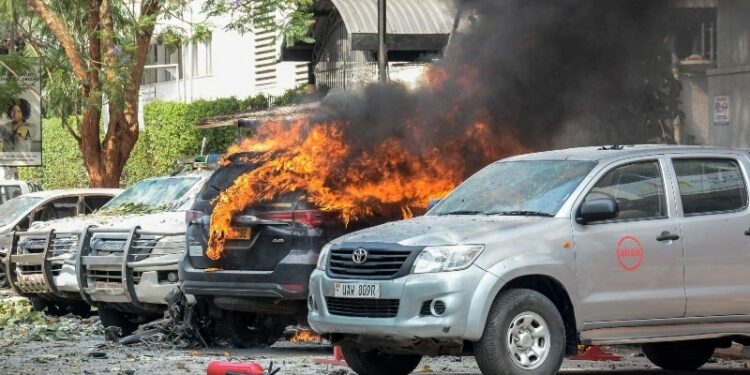 Bombing near Parliament of Uganda on Tuesday

As the country mourns the lives and property lost during the twin city explosions in Kampala early this week, emphasis should also be put on finding a lasting solution that will bar a recurrence of such atrocities.

The Tuesday attack on our people is an unprecedented one in a way that bad people recruited our own young people to execute their evil plans. Suicide bombing is a new phenomenon in the country which has already, understandably spread it’s fear waves far and wide.

Security and leaders and leaders have already cautioned the public not to act out of fear and panic for they would be playing the ball according to the plan of the attackers- striking the population with fear and panic.

The strategy above, besides the tireless efforts of our security, is majorly premised on our vigilance as the public. I would like to add my voice to the numerous calls on ensuring we are one another’s keepers as the only way to compliment our our gallant men and women in uniform as they strive to keep us safe.

As per the warning by security, the threat of further terror attacks is still prevalent. Heading into the end of the year festivities thus, we out to be extra vigilant since the bad guys might want to use the laxity caused by the celebrations to cause more havoc on the population.

Let’s watch out for any new strange faces in our respective localities and alert police, or the local leadership in case of any suspicions.

Terrorists, this time round are people from within us. Do not hesitate to contact any suspicions detected solely because the person is known to you, or is a son or daughter of some good citizen from around. Terrorists are ordinary people living amongst us but who have been radicalised by the terror networks.

As for the communities at the different borders, ensure that all visitors from across the borders are thoroughly scrutinised and screened by the security. There have already been concerns over the possibility of allowing bad people penetrate communities under the guise of seeking refuge.

In the wake of the first two terror attacks in Komamboga and Mpigi last month, Deputy Presidential Press Secretary, Faruk Kirunda rallied security at the borders to up their game in scrutinizing the refugees that were fleeing an M23 rebel induced insurgentscy in DRC. He was concerned terrorist could use the impasse to occasion more danger to the country.

Avoiding highly crowded places is also key to fighting, or mitigating casualties in case of a bomb attack. This should be an easy precaution since for the last nearly two years, we have been distancing as one of the measures in the fight COVID-19. Terrorists will againstalways want to blow where casualties are expected to be many. Places like Acades, markets, Bus terminals, traffic jam, places of worship, among others are the most likely targets. Optimal vigilance in these places will go a long way in thwarting the terror hostilities.

Last, and most importantly, lets take heed of the advise and updates periodically given by security organs. They are always ahead of us. The enemy is always morphing strategies. Keeping tab on the intelligence-led update will help a great deal in tweaking our self protection measures.

As a united force, with no doubt, we shall surely defeat this war like the many others before.

The author is the Deputy Resident District Commissioner for Buvuma District.