ORTEGA IAN: Museveni’s strategy of extreme violence is breaking Bobi Wine emotionally and by January he will almost have surrendered 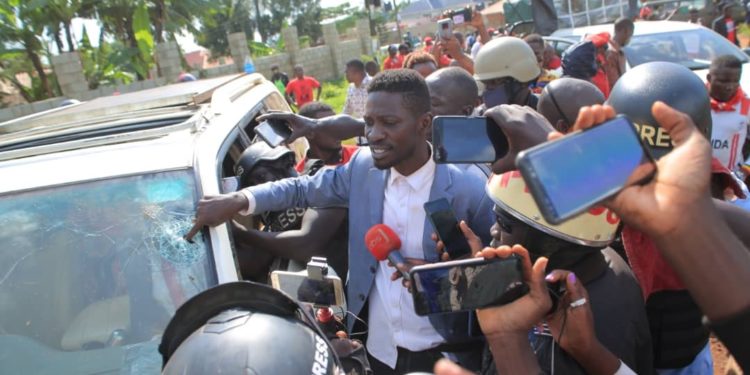 I saw a video of Bobi Wine, emotionally distraught, leaning next to the floor. An injured Dan Magic looked on helplessly albeit trying to encourage him to keep going.

It then hit me that Museveni deep down was celebrating. He’d gotten Bobi Wine exactly where he needed him. You know Museveni is a specialist in war games. It is his turf. Nothing excites him like these kind of calculations.

When everyone thinks Museveni is in panic, that’s when he’s at his best. He loves those games.

I am forced to believe that Museveni has chosen the strategy of extreme violence towards Bobi Wine and his supporters. He wants to make it very costly to be part of Bobi Wine, to support him, to walk by his side.

But above all, Museveni wants to emotionally break Bobi Wine. He wants to beat out the ‘inhii’ spirit in him. Because he knows eventually Bobi Wine will have the humanity in him, look at all the people that have died or been injured in the past weeks and simply halt everything or at least lose the momentum.

Deep down, Museveni must have asked himself; “what is the worst that can happen? Perhaps 1000 dead?” And chosen to bet on this strategy. By doing this, he’s already scared many people off Bobi Wine’s campaign trail.

Mothers for example will now rather watch Bobi Wine from a distance.

But above all, Museveni wants to make Bobi Wine busy emotionally. He won’t have the time to think strategically about the election. By the time we get to January, Bobi Wine will almost have surrendered. Museveni will also have managed to prove to his citizenry in the countryside that he is unbeatable, invincible and all powerful. First, this will discourage many from turning up to vote since in their minds they will be certain their vote won’t change a thing. Voter apathy favors Museveni. The fewer people show up to vote, the better chances Museveni stands. In the Central region, Museveni will make it a hooliganism playground. Election materials will be delivered late, names will be missing on registers. Museveni is weak in the central so it will favor him to have a disorganized affair here.

With Bobi Wine emotionally, physically and mentally beaten, he won’t have the right capabilities to circumvent Museveni’s rigging machinery. Let it be noted that not all rigging is with the physical ballot. Rigging can be through creating new constituencies.

If anyone thinks Museveni is about to tone down on the iron hand methods, that would be naive of them. For now, Bobi Wine is playing right into Museveni’s script. Museveni must be somewhere enjoying his mug of porridge.

Right now, if I were Bobi Wine, I would simply pull out of the election. Because the fact is, he can’t and he won’t win it! In the game where Museveni is the linesman, the referee, the ball boy, the one who makes the rules, decides which one is a goal post, you just can’t win.

And for Museveni, if you were left with a few years in power, it would make sense to bet on a strategy of brutality.