ANDREW MWENDA: What Museveni’s efforts to cling onto power mean to Uganda

Today President Yoweri Museveni was nominated to run for an eighth term of office. When he wins this election, it will take him to 40 years as president, a remarkable feat. His efforts to cling to power, in spite of many promises not to, tells us very little about Museveni the man but a lot about power itself: few men find it possible to leave it easily and willingly.

Yet in spite of my desire to see Museveni leave power peacefully, I find it difficult to associate with Uganda’s opposition. Even when I try to warm my heart to them, their leaders and activists just make it extremely difficult. One such example is the cartoon (see below👇🏾) they have been circulating around on social media of a malnourished Uganda feeding an overfed NRM. Yet the opposite is the case: NRM has nourished Uganda, not sucked it. 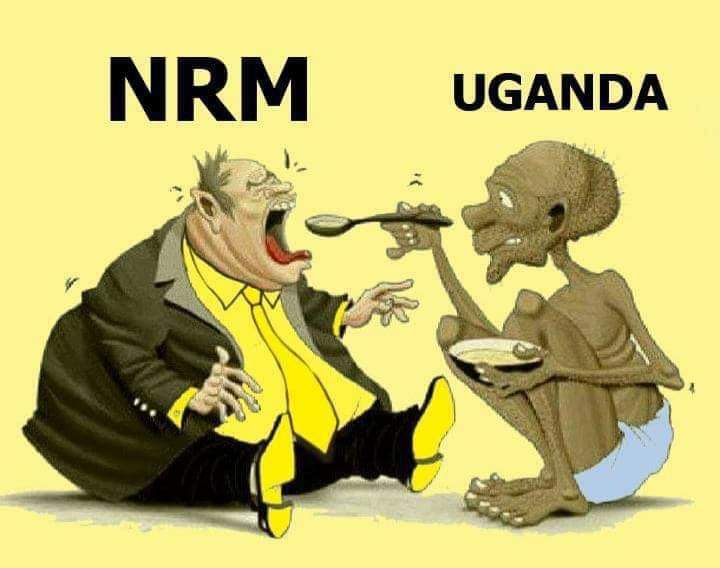 The opposition in Uganda have invented a problem that Museveni has destroyed our country and then designed a solution to save it from that catastrophe! If you invent a problem, and assume it to be real, your solution will be just as misguided. You will be planning to build bridges where no rivers exist.

Museveni inherited a country where both the state and economy had collapsed. He has reconfigured the state and placed the economy on a long term growth trajectory. Today Uganda, which had been dubbed a failed state is securing the peace of South Sudan, Somalia etc. For the last 34 years the economy of Uganda (measured by GDP) has grown at an annual rate of nearly 7% per, its per capita income at nearly 4%, both of which are among the best in history.

Thus Uganda’s economy was about $1.6 billion (in 2017 prices) in 1986, now it is $35 billion. While the economy has grown twenty fold, the population has grown less than three fold from 15m in 1986 to 43m today. Hence for the opposition to claim that Museveni has impoverished Uganda is to indulge in myth making and dangerous fiction making. If the opposition want to build this country, they need to tell us it’s real, not imagined, state and challenges.

There are even other indicators of the wellbeing of Uganda as a country and its citizens we can point at. In 1986, our tax revenues were Shs 5 billion (Shs 31 billion in 2017 prices). Today URA collects Shs 60 billion per day (before disruption by covid expected revenues were Shs 21 trillion). Revenue per person per year in 1986 was Shs 2,000 in current prices while today it is Shs 507,000.

Even at the level of household assets Ugandans have done very well. Let us look at the results of the National Housing and Population Census of 2014 to see whether Ugandans are growing richer or poorer. And these figures are six years old and so much has improved since.

Even when we look at household assets like possession of television, radio, bicycle, car, modern mattresses (as opposed to sleeping in grass), motorcycle, blankets, bedsheets, sofa set etc. the number of households with access to these assets as greatly increased, meaning their well-being has improved. Indeed access to and affordability of such goods as bottled beer, soda, sugar, salt, soap, bread, keresone, cooking oil, etc. has also significantly increased. Every part of Uganda has benefited this way.

I grew up in a country where bottled or tinned beer and soda and packed or bottled juice were a luxury for the rich, many of whom could afford them but had no access to them; where basic consumer items like cooking oil, kerosene, salt, sugar and soap where not available in shops or affordable by most people. That is the Uganda Museveni inherited.

Even though our country is still very poor, the numbers above show that the lives of many Ugandans have greatly improved under Museveni. The opposition should not imagine or invent a Uganda that does not exist. They should demonstrate that they know where we were in 1986, where we are today and what it has taken for us to get here. Only then can anyone with a brain believe that they have an idea of where they want to take the country, leave alone knowlege of what it takes to take it there.