A small section of the political and media class is wagging their loose tongue faulting President Yoweri Museveni for having not walked the entire 195km trek from Galamba in Wakiso to Bireembo in Kakumiro district on foot having chosen to partly drive about half the route. For the record, President Museveni actually walked 84km of the trek including climbing the three most treacherous Kanzira, Katera and Butoloogo among the Singo hills.

In addition to being long and winding, there are also very steep and stony. On the first day of the trek Museveni made 21 of the 28km on foot, in addition to addressing numerous roadside public engagements where he educated, explained and offered hope to many Ugandans who gathered anxiously waiting for him.

Like the military operation from Galamba to Kabamba in December 1984, in this trek, President Museveni moved 1700 to Bireembe of which 1,213 were vetted trekkers. On the last day, Museveni insisted that trekkers walk the 14km from Kasambya to Bireembo, the most prized destination.

When the trek was announced in December 2019 to cover 100km, many people sneered because that would have been easily swallowed especially by Museveni, the undisputed veteran of many underground wars in Uganda from 1971 when he first tried to organize against Idi Amin’s terror machine. But President Museveni revised the route to 195km avoiding urban centres, and as the Commander-in-Chief, he has ably explained why he chose some sections to be motorized on account of many delays he anticipated would be caused by engagements with local people he couldn’t just ignore simply because he was ‘’walking to Bireembo.

I must say, those engagements were fruitful as they enabled first-hand accounts with local leaders and people on various challenges facing government service delivery, family and community income generation efforts, and social economic transformation agenda. In particular, President Museveni and other trekkers were able to see glaring weaknesses in local and middle level leadership including MPs that must be rectified if collective progress is to be achieved faster.

As the trekkers exited Wakiso and Nakaseke districts, into Mityana, Kasanda, Kiboga, Mubende and Kakumiro, there appeared some slight progress as the Singo countryside had better homesteads, commercial plantations of coffee, banana, maize, beans, potatoes and onions implying reliable income streams for the families. The public road networks too were much better than in Gombe, Kikandwa, Masulita, and Semuto sub-counties.

President Museveni demonstrated that he was a teacher-leader, and political mobiliser on a mission to provide both empathy to the most vulnerable, and hope to those still able and willing to work in order to enter into the income economy and prosperity. The escapades against Idi Amin, had taken the young Museveni through the forests in Busoga, Elgon, Teso (Kaberamaido), Gulu (Atiak), and latter Mbarara. Museveni and others eventually conquered through Mbarara, Masaka, Kasese, Fort Portal, Masindi up to Arua where he reached Sudan border mostly on foot.

His second war, the five-year protracted peoples struggle mostly organized in what became the Luwero Triangle stretching from Kampala suburbs to far away Kasese, Masaka, river Nile banks and shores of Lake Victoria. Now, if anyone disputes Museveni’s strategic plans, determination, resilience and endurances, that was actually when he proved himself, and so, doesn’t need any more public proof to please the naysayers.

As a trekker, I learnt earlier to keep to my own speed and endurance levels knowing that distance and obstacles would wear down those fighting for the starting frontline and photo opportunity with President Museveni. By the end of the first day, a few of us including Richard Todwong, Peter Ogwang, Godfrey Kiwanda, entertainment promoter Balaam Barugahare, journalists Gyagenga Semakula and Joseph Kizza among others took an early lead.

From the second day, until Bireembo, with President Museveni’s permission, we formed the leading pack in front of him, often reaching the halt for light refreshments three hours ahead, and indeed covered the longest distance of the trek on foot. Ministers Elly Tumwine, Ruth Nankabirwa, Galabuzi Ssozi, Muruli Mukasa, Esther Mbayo, and Judith Nabakooba kept both pace and company throughout with President Museveni. One youthful minister was picked up the Butoloogo hill by a canine van, the only stretch he didn’t complete. Matia Kasaija, 76, joined the trek at Ndyabweru, walked steadily only to get a bad muscle pull a few meters to Bireembo.

In my view, the most captivating war narratives came from Brig. Julius Kihaanda, the first NRA war casualty, shot in the leg on the first day in the Kabamba attack on 6th February 1981, and Gen. Tumwine whose eye took a bullet later that year in Bukomero. Their travels from the remote villages in Kiboga 170 km away, sneaking into Kampala and eventually Nairobi for treatment avoiding detection by the UPC government was heart rending. Kihaanda’s multiple escapades to Moroto and Gulu to collect guns showed men with knuckles. Both still walk with limps to-date. It demonstrates audacity, discipline and commitment to concealment by guerrillas with a cause. It also revealed that the NRA war complete hasn’t been told, hence need for sustained research. 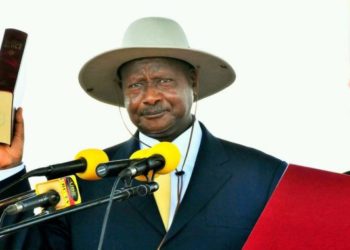