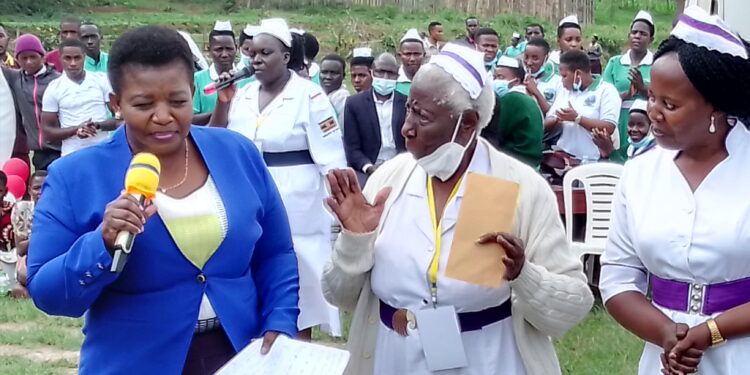 The Minister of General Duties in the office of the Prime Minister, Justine Kasule Lumumba has called for thorough investigation into reports of brutality by Midwives against expectant mothers who go to seek for maternal services in public health facilities across the country.

The former NRM Secretary General was speaking as the Chief Guest on the International Midwives Day Celebrations in Kabale District.

The International Midwives day is celebrated annually on 5th May to recognize and honour the work of midwives, and promote awareness of crucial care that midwives provide to mothers and their new borns.

Ms Kasule Lumumba said that there was need for a nationwide investigation to get a comprehensive report on the major reasons why some midwives abuse and beat up mothers who go to public hospitals in search for antenatal services, especially in the labour ward.

She said it was useless to keep condemning brutality of the midwives if Government could not establish the causes of various forms of misconduct by health workers.

“These who are rude, those who are beating women who have gone to deliver. It is also our responsibility to find out why they are behaving that way. sometimes the working environment is not favourable and sometimes they are overworked, and they end up behaving rudely,” said Lumumba.

The Kabale Municipality Member of Parliament Dr. Nicholas Thaddeus Kamara explained that the low staffing levels at different health facilities, inadequate medical equipment, and low payment of midwives compared to the work they do, could also be contributing to the way the midwives behave in the labour wards.

Emily Turyasingura, a midwife attached to Kabale Regional Referral Hospital Hospital told this media house that some of them were facing a challenge where regardless of the low staffing levels, some expectant mothers refuse to be served by midwives dressed in pink and preferred those in white uniforms.

The Senior Midwife at Kamukira HC.IV in Kabale Municipality Lilian Kebirungi also noted that at times they were receiving drunk mothers who provoked midwives in the labour ward. However, Ms Kebirungi asked midwives to always exercise restraint in such scenarios.

A report by the National Library of Medicine Titled Improving Midwifery Care In Ugandan Public Hospitals notes that over 80% of nurses and midwives in public health facilities have been found to experience job stress and only 17% are satisfied with the job.

Katikkiro Mayiga reveals why people with only A’ level certificate shouldn’t contest for higher political offices.