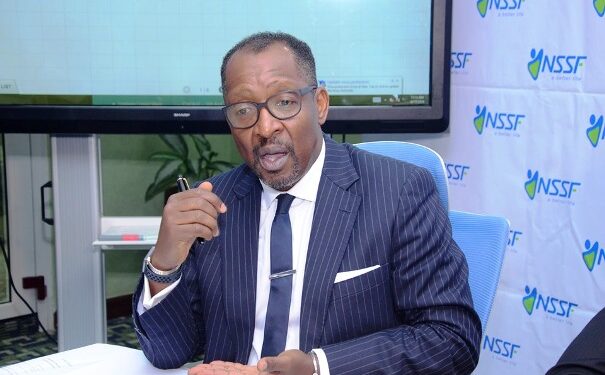 The construction of the one stop center for all government offices was a result of the excessive rent dues, government of Uganda was paying for renting for office space by several Ministries and Government Departments. More than Ugx 700 billion would be wasted in the renting of not only such offices, but also courts of judicature offices.

President Museveni, in a cabinet memo in 2016 ordered for the construction of such one stop center for government offices and the National Social Security Fund would engage in the purchase of land, acquisition of a consultant and the issuance of bidding notices for a successful bidder to construct such a mega project.

The National Social Security Fund, with guidance from the Head of State, President Yoweri Kaguta Museveni earmarked Ssentoogo and Partners to engage in such processes.

The company later cleared the purchase of 93 acres of land at Bwebajja, each at Ugx 1 billion and later engaged in a process of ownership. The head of state believed that with such an institution (NSSF) in place, funds would easily be used in the purchase and construction of such premises and payment back to the gratuity fund would be done repaid by Government of Uganda in instalments.

This would enable government halt payment of rent to offices in the different locations in Kampala and allow government to operate, with all Ministries, Departments and Agencies in one place.

The Head of State (President Museveni) advised that despite the National Social Security Fund having the resources, it ought to work with the different government departments such as the Ministry of Works and Transport and the underlying architects association for technical guidance for which NSSF does not have.

Government also, in a February 2nd letter from the Permanent Secretary of the Ministry of the Presidency Yunus Kakande to the Minister Milly Babirye Babalanda admitted that government had earmarked a Contract management consultant, Paragon Architects Limited, whose job was to monitor and oversee the interests of government and yet NSSF kept meandering to get one and thus Ugx 1.4 billion from the treasury was required to quickly expedite the process.

At the time, the National Social Security Fund sidelined the Ministry of Works and Transport, and a professional body, the architects association that are legally qualified to draw project designs such as those.

A letter by the Uganda Architects Association this website has seen illustrates a protest by the Association on what had been done by NSSF to earmark a contractor who would handle the project designing and the bidding process to have a company construct a Ugx 900 billion one stop center for all government offices.

This website understands that despite the availability of M/S Ssentoogo and Partners, a company cleared by the head of state and several security agencies to handle the consultancy work for the whole project, NSSF chose Dar Al-Handasah Consultants (Shair & Partners) in Association with Creations Consults Africa Ltd and Symbion (U) Ltd in Association with SVA International (PTY) Ltd who had failed at the very inception of the bidding process.

Dar Al-Handasah Consultants (Shair & Partners) is understood to have used a 17 year old engineer to approve shoddy works at Entebbe International Airport during the upgrade and expansion of the runways 17/35 and 12/30 of the airport with its associated taxi ways and aeroplanes parking aprons in the controversial USD 200 million UCAA – Exim bank deal.

It is understood that the company, in total disregard of the guiding principles and protocols of the procurement and engineering works, was offered a certificate of completion rendering the runways unable to operate. It is believed that the poor construction of the runway caused the skidding of Rwandan aircraft, prompting an investigation by President Yoweri Museveni and change of contractor to the UPDF engineering Brigade and M/S Ssentoogo and Partners.

According to the Democracy Center for Transparency of the European Union, Dar Al-Handasah Consultants (Shair & Partners), a Lebanese group is one of the world’s most renowned architectural design companies and one of the largest employers in Lebanon. However, this does not happen without consequences the group is under investigation for corruption in three jurisdictions: Angola, Egypt, and Lebanon and finally, due to a serious accident (due to construction without the necessary safety measures) also in Saudi Arabia.

It is now known that, thanks to his friendship with an Angolan guerrillero, who later became president (José Eduardo Dos Santos), Dar Al-Handasah also received orders in the 1970s which were paid for by the Soviet Union and guaranteed by the one, who is accused today of being a former employee of the KGB Herminio Joaquin Escorcio.

With investment figures of more than USD 3 billion, the company is accused of offering more than USD 100 million bribes by 2004. It is upon such background that the Uganda Architectural Association warned the National Social Security Fund on the dubious acts of the company, for which advice was sidelined.

“We actually advised as we are duly mandated to do. However, such advice from our principal was not taken, neither did the Gratuity fund find time to do a background survey on what needs to be done while employing such people to construct a secure place for our one stop government offices center,” a source at the Architects Association who asked not to be named told this website.

Another source at the National social security Fund told this website that the engineers at the Ministry of Works and Transport led by the Chief Mechanical Engineer Tony Kavuma Bafiilawala protested such decisions made by NSSF without engaging the Ministry for technical advice from the line ministry.

This website could not independently confirm this information since the known telephone contact of the Chief Mechanical engineer Mr. Kavuma Bafiilawala could not be reached at the time of publishing this story.

Well as this website tried to reach the Managing Director of the National Social Security Fund Mr. Richard Byarugaba on his known telephone numbers. However, all calls were not picked on Tuesday this week