The construction being implemented through the Ministry of Agriculture, Animal Industry and Fisheries is part of the strategic plan to address water challenges and improve the food value chain and commercial agriculture in Teso and Karamoja. Construction  of these facilities includes dams, valley tanks, fish ponds, deep production wells, and overhead storage tanks, among others.

Upon completion, the facilities will provide water for livestock and crop resources. Other similar facilities are being constructed in the districts of Kotido, Moroto, Amudat, Serere and Katakwi among others with additional facilities  like solar powered boreholes. The works contain land clearing, land opening, ploughing, agro processing, value addition and support to farm structures development as the government continues to address key water challenges in Karamoja sub-region.

Speaking at the launch, vice President Jessica Alupo said water has remained one of the biggest challenges to pastoral communities in areas of Karamoja and some parts Teso Sub-regions; the reason the government has come out to avail such communities with sustainable water solutions.

She said that people move long distances to access water for their animals which has impacted on their social economic potential adding that this will become a thing of the past following this strategic intervention.

The Vice President who was accompanied by officials  from the Ministry of Agriculture Animal Industry and Fisheries led by the line Minister- Frank Tumwebaze, reminded the people of Abim district that  while Agriculture  was  in the past, known and possibly taught as  the growing of crops and rearing of animals for food, the mentality and practice has shifted to include agriculture for commercial purposes, “I want to encourage you to plan to produce what you can eat as a family or clan but also produce what you can sell to earn money,” Alupo said.

She said Uganda is a blessed country where 70-percent of the population is involved in agriculture directly because of the fertile soils, favourable climate and suitable weather patterns. 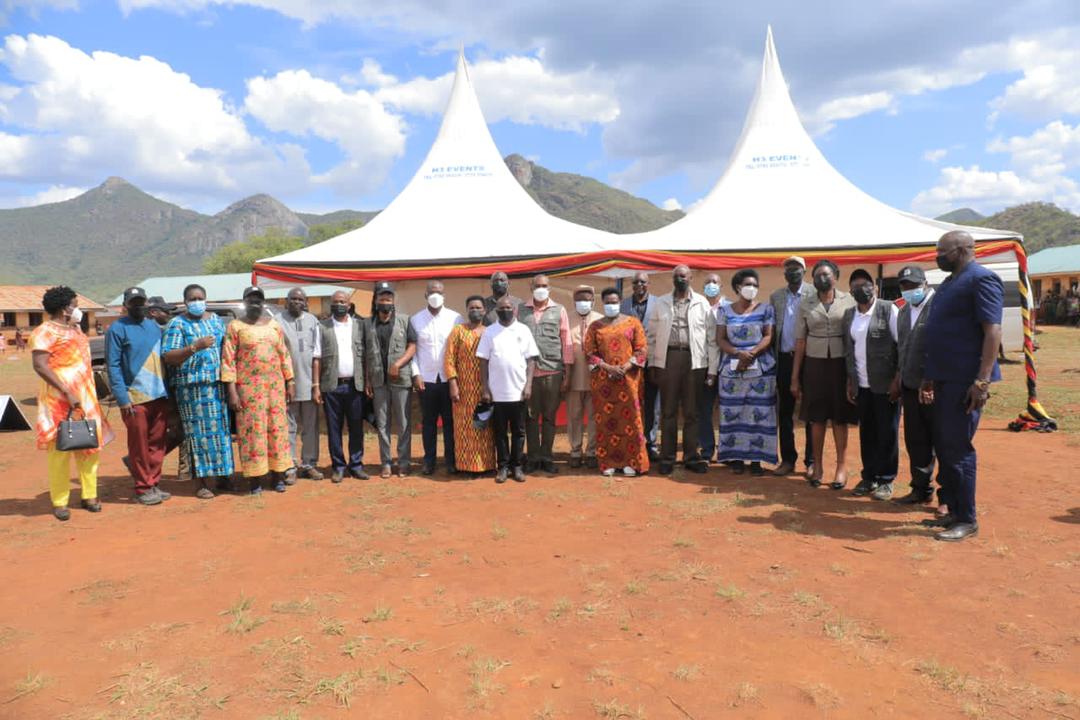 Alupo reiterated President Yoweri Museveni’s message that there are four areas where Ugandans can tap jobs from which include; Agriculture, Industry, Information Communication Technology (ICT) and services and urged communities to take keen interest in them to better their lives. Agriculture, she said, was central to all the four sectors because it is the source of raw materials, the source of food for survival and called upon communities to ensure they maximize productivity by tapping into the government’s policy on agriculture which ensures the provision of critical infrastructure for the farmers.

“Government is deliberately establishing valley dams and such facilities as one of the critical infrastructure for agriculture to make water available for communities to increase production and productivity,” she remarked, adding that in order for communities to realize the value of the dams, people must take up rearing of animals, horticulture, fishing, and aquaculture to achieve full potential of the dams as direct beneficiaries.

The Vice President also called upon communities to support the team of engineers doing the construction of the dams and urged the Ministry of Agriculture to use local labour during construction of the dams so that communities can own the project. The valley dams are being constructed under the project; ‘Improving access and use of agriculture equipment through use of labour saving technologies for agricultural mechanization project’ whose implementation is the mechanization unit of the Ministry.

Alupo thanked the Minister of Agriculture and MPs on the Agriculture committee of Parliament for having designed and supported the strategic plan for Karamoja. She promised overwhelming support towards the establishment of valley dams to counter the- would be harsh weather conditions.

The Vice President explained the different Government infrastructural support policies-like the provision and availability of tractors, irrigation and  construction of cattle markets. “When one gets a tractor, they are able to plough a wider acreage compared to the ox-ploughs in a very short time hence competing with the erratic weather patterns,” Alupo said.

Karamoja sub-region is largely plain, motorable and the deployment of tractors for agriculture, availability of water for production through irrigation and availability of markets would collectively address food insecurity as well as maximize commercial production and productivity hence strengthening our economy in the long run.

Speaking at the same function, the Minister for Agriculture, Hon Tumwebaze underscored the importance of  the facilities as essential providers for  water for stock, irrigation and gardens. He explained that these dams will also provide a habitat for wildlife, water for fire protection and can also be used for recreation. He urged communities to guard the facilities.

State Minister for Animal husbandry –Bright Rwamirama said providing water is a very important development for livestock and crop resources adding that maintaining a healthy dam with clean water can improve the health of animals and increase the productivity of the farmers.

He explained that the project is as a result of a supplementary efforts geared at disease control. He said one of the ways to stop animal diseases is to stop animal movement in search of water.

Earlier, the Ministry of Agriculture had launched construction of   works for the Ogolai Community Dam in Kasilo-Serere District.

Present at the function in Abim were Minister of state for fisheries-Helen Adoa, several MPs, RDCs and LC-V chairpersons from the region, several district and local leaders.