Parliament lauds fallen BoU Governor Mutebile for service above self 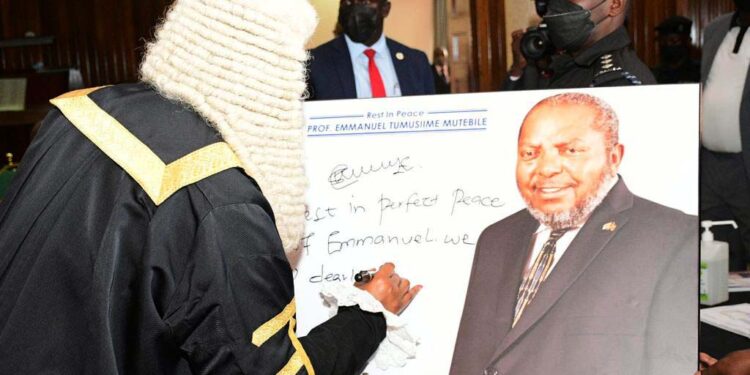 The Deputy Speaker of Parliament, Anita Among, eulogized the late Prof. Emmanuel Mutebile for serving Uganda with distinction and integrity

Members of Parliament have extoled the late Prof. Emmanuel Tumusiime Mutebile for what they termed as an immeasurable dedication to the growth of the economy of Uganda.

The Prime Minister, Rt. Hon. Robinah Nabbanja, presented to a Parliament a Motion to eulogize Mutebile, who served as the Governor Bank of Uganda (BOU) before his death. Parliament held a special sitting in his honour on Thursday, 27 January 2022.

Nabbanja said Mutebile was a diligent leader who served Uganda with dedication and patriotism and participated in shaping the destiny of Uganda.

The Leader of the Opposition, Hon Mathias Mpuuga said that Prof. Mutebile was the person with the right credentials to hold the various key positions on account of his competence that helped cushion the economy from a state of near collapse in the early 1990s.

“He was one of a kind; a straightforward man from Kabale district, who went on to make history as the founding father of neoliberal economic practices in Uganda’s contemporary history,” Mpuuga added.

Mpuuga said Mutebile was not afraid to talk straight while standing his ground even when it made the powers that be uncomfortable.

He cited an example in 2011 when the Governor BOU disagreed with President Museveni over the decision to spend US$740 million on six fighter jets and in the same year, Mutebile attributed the inflation and exchange rate depreciation in the country to the NRM party using money from the Central Bank to fund its elections.

Ndorwa East MP, Wilfred Niwagaba said that Mutebile was instrumental in interceding and reconciling warring political factions in Kigezi sub-region and he has left a vacuum in that respect.

Niwagaba held that Mutebile made a major contribution in education especially in Kigezi through supporting the inception and establishment of the non-profit Kabale University.

“He used his position as the Governor, through the corporate social responsibility function of BOU, to support the University until the government took over,” he added.

Additionally, Hon Solomon Silwany (NRM, Bukooli County Central) moved an amendment to the motion requesting that the government or Bank of Uganda provides a suitable residence for the family as a token of appreciation of his service to the country.

Hon Barnabas Tinkasiimire (NRM, Buyaga West County) supported the amendment to the motion saying that such a distinguished servant should have his dependents supported by the state.

Parliament adopted the motion with the amendment urging government to provide for the welfare of the late Mutebile’s family and report back within the coming weeks on its position.

The Prime Minister promised to consult on the matter and revert to Parliament on the way forward.

Mutebile passed on aged 73 on Sunday, 23 January 2022 after suffering from diabetes and related complications while undergoing treatment in Nairobi, Kenya.