by Mourice Muhoozi
in News, Politics
27 1 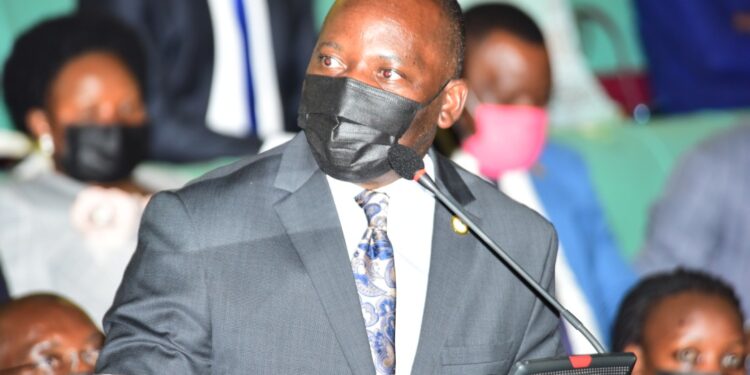 Today Thursday January 27th, 2022, the Leader of Opposition in the 11th parliament of Uganda Mathias Mpuuga Nsamba, joined the rest of distinguished intellectuals in paying tribute to the fallen Economist Emmanuel Tumusiime Mutebile who died on Sunday.

In a statement released today morning, he commiserated with the family of the bereaved by expressing deep sympathies to them, for such a gigantic loss of their beloved son and bread winner.

He also described him as an honest leader, who didn’t fear talking straight what sometimes made the ruling elite to feel uncomfortable.

“On behalf of the team that I lead in Parliament, I would like to extend our sincere sympathies to the bereaved family, Staff and Management of Bank of Uganda, the People of Kabale and the country at large for loss of one of the economic pillars of our time,” reads the statement.

He also described the late banker as someone, whose selfless efforts greatly contributed to national and institutional building at a time when the economy was on the verge of collapse in the 1990s.

However in a shocking twist, Hon. Mpuuga used this as an opportunity to bitterly criticise the government and its policies.

He noted that Mutebile’s death leaves a lot to be desired. In the statement, he said that Mutebile has died at a time when Uganda needs him than ever before, to accomplish what government has failed to do.

He asserted that the fallen governor has died at a moment when Uganda is still deadlocked among the third world developing states, worsened by ineffective and inefficient government policies like Parish development Models.

“This decorated economist has passed on and left behind leaders who are selling the Parish Development Model as a miracle economic transformational tool that will uplift our poor citizens from poverty to prosperity,” reads the statement.

He echoed a critiquing tone, by expressing his dissatisfaction with what was entailed in President Yoweri Museveni’s speech, issued yesterday during the NRM 36th anniversary celebrations, citing that it was a duping speech, that exaggerated the economic prosperity of Uganda.

“After more than 40 years of active service guiding economic policy and management in Uganda, the late Mutebile bows out at a time when Ugandans are still waiting to see the economic miracle often propped up by the NRM leadership including at yesterday’s gathering at Kololo grounds.”

According to Mpuuga, Mutebile has left Uganda in a deplorable economic state, as the 6th worst performing country in revenue collections when measured by revenue as a percentage of GDP.

Worse still, Mpuuga made it clear that at a time of his death, Uganda is still merged on the mire of a huge public debt with interest payment on public debt in 2022/23 programed at Shs 5. 088 trillion of which, Shs. 4.059 trillion is interest payments (excluding principal) on domestic debt which was issued by Bank of Uganda.

The L.O.P also pointed out that the late Mutebile opposed the unrealistic and unnecessary spending, which according to him would drained the country’s tresury.

He alluded to an incident in 2011, when the fallen governor disagreed with President Museveni on the decision to spend $740 million on the purchase of Sukhou SU-30 flanker fighter jets from Russia, and said it further drained the country’s treasury.

He further decried President Museveni’s impunity, and said that even as the governor sharply disagreed, the president went ahead to issue a directive to the finance ministry, to disburse the said funds to accomplish the controversial Sukhoi SU-30 deal, without approaval from parliament.

In a move to vindicate himself, the straightforwarded governor went a head to inform parliament that he was duped that in just two years, procceds from the oil revenue would be used to repay the BoU loan, in order to accept the release of millions of dollars to seal the fighter jets deal, which further drained the economy.

Most importantly, Mpuuga also asserted that as a fearless governor, Mutebile attributed the Inflation and exchange rate depreciation of 2011, to the election cash bonanza in which NRM and its leadership literally broke into the central bank in order to buy votes plunging the country into more economic chaos.

The fallen BoU governor will be laid to rest on January 30th 2022 at his ancestral home in Kabale district, South Western Uganda.